Peterhead Port Authority is set to support the start of offshore construction work for the European Offshore Wind Deployment Centre (EOWDC) after signing an agreement to harbor the suction bucket jacket foundations for the 11-turbine scheme. The contract will see the port moor one of the world’s largest floating cranes, with a maximum lifting capacity of 5,000 metric tons, and up to six barges that will transport the 11 foundations - the heaviest of which weighs around 1,800 metric tons and is about 77 meters high. 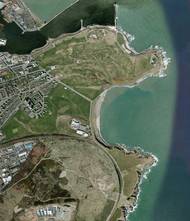 Aberdeen Harbour Board has reinforced its ongoing commitment to expansion plans at Nigg Bay it was announced, but a final decision on the project still awaits the necessary planning consents. At its October meeting the Board maintained clear support for the project to continue, but recognized that a final decision would be subject to the outcome of applications for a Harbour Revision Order and two Marine Licences, which are currently under review by the Scottish Government.

Scotland's Aberdeen Harbour Board submits its 'Directions for Growth' document to the National Planning Framework. In response to a call for candidate developments the document outlines the findings from an ongoing feasibility study, which was launched in September to assess the viability of potential expansion options for a new or improved harbour facility. Three potential locations out with the existing harbour have been considered  North Beach, immediately to the north of the harbour…

Aberdeen Harbor Engages in Study into Potential Port Expansion. Aberdeen Harbour Board has commenced a major feasibility study into the potential expansion of facilities at the port. Continued growth in traffic and cargos, as well as an increase in the size of the vessels has prompted the study, as projections indicate that Aberdeen Harbour will remain the principal port for the oil and gas sector in the North Sea and West of Shetland. The harbour has also been outlined as a potential…

Aberdeen Harbour records significant North Sea energy sector traffic increase in first half 2012. Continued growth in the oil and gas sector was reflected in the increase in support vessels that used the port over the first six months of the year – up nine per cent from 2,580 in 2011 to 2,814 in 2012 – a further demonstration of the significant role the harbour plays within the energy industry and the benefits it provides to both Scotland and the UK. The half-year figures detail increases in traffic with both vessel numbers and tonnage on the rise.

Aberdeen Harbour Board has awarded a £5.2m contract involving major improvements to the port entrance and for widening and deepening the navigation channel. Harbour Board chief executive, Colin Parker said: “As the centre of activity for the energy industry’s marine operations in North-west Europe, the importance of targeted investment and development has been a top priority and, with the energy industry evolving, we have worked hard to ensure we stay ahead of the game. ”Once…

The import and export of goods by sea remains a vital part of the regional economy of the north-east of Scotland and this has been demonstrated more than ever this year, with a positive rise in activity levels at the port. Next year is set for similar success, with the Board planning to invest in the region of £24million to ensure improvements at the harbour continue to meet the demands of new and existing customers. There are already some exciting plans in store for 2012, including continued work at Torry Quays with the start of Phase 2 of the development.

Aberdeen Harbor has bid a fond farewell to another successful cruise season, with the arrival of the final vessel of the season, Hebridean Princess, a small luxury liner making its maiden voyage to the port.Carrying just 50 passengers and a crew of 38, the vessel’s ‘East Coast Adventure’ saw it berth at the harbour overnight before heading to Dundee, the East Neuk of Fife and Leith.The Princess is one of nine vessels that have called into Aberdeen Harbour since the cruise season began in May, with the MS Silver Cloud, Le Diamant and Europa also making their first visits to the port.

Aberdeen Harbour has awarded Macduff Shipyards the contract to build a new workboat. The $1.5m vessel, inclusive of its high-tech survey suite is due for delivery in 2011, and will replace the port’s existing workboat. It will be fitted with twin 350 hp engines, a deck crane and at 147.f ft in length, will be used for general harbour activities including surveying, plough dredging and debris recovery. Ray Shaw, operations director & harbour master at Aberdeen Harbour, said: “Following a competitive tender process we are pleased to award this contract to local supplier Macduff Shipyard.

Aberdeen Harbour Board has appointed James Bell as finance director following the recent retirement of Graeme Clark after 26 years service. Bell joins the Board from the Caledonian Brewing Company, a subsidiary of Heineken UK, where he was head of finance since 2002. A graduate of Dundee University, Bell initially trained with Bird Simpson, Chartered Accountants, and spent seven years with Meston Reid & Co before joining Diageo in 2001.

Britain’s leading ship supplier, Hutton’s, has responded to growing demand from the offshore oil and gas sectors by opening its biggest UK depot in Aberdeen. Hutton’s, which recently announced record sales figures, moved into the 13,000 sq ft (1300sq m) depot from a smaller 5,000 sq ft warehouse a month ago. Hutton’s need for expansion is a result of increased business from the offshore industry. The new facility is located near Aberdeen harbour and provides Hutton’s with considerably increased capacity.

Aberdeen Harbour has reported a healthy start to 2009, remaining on budget for the first half of the year. Passenger figures have seen an increase, with more than 63,000 using the ferry service between Aberdeen, Shetland and Orkney, against 57,000 the previous year. Ten cruise vessels also called in to Aberdeen through to the end of June. Imports and exports were lower than for the period last year, from 2.5million tonnes in 2008 to 2.3 million tonnes for the first half of 2009, however, vessel tonnages remained at over 11.5 million gross tonnes.