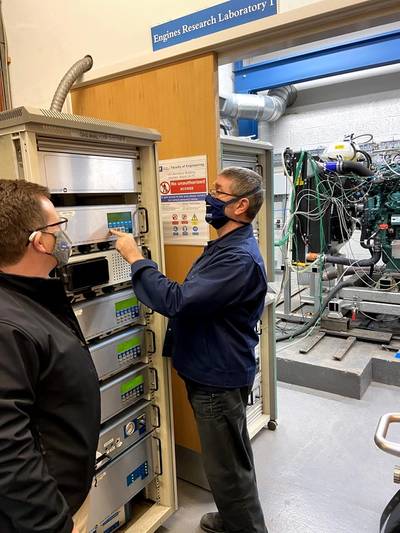 A group of academic and industrial partners were awarded a $6.7 million grant by the Engineering and Physical Sciences Research Council (EPSRC) to accelerate understanding, technologies and policies relating to the use of ammonia as a sustainable fuel. The project begins in June 2022 and will run for 5 years.

The lead investigator is Prof. Alasdair Cairns, who is Chair in Propulsion Systems in the Faculty of Engineering at the University of Nottingham, where the majority of the research is being undertaken.

“As countries seek opportunities for decarbonization, there is a great deal of interest in green ammonia as an energy vector and a fuel for commercial shipping," said Prof. Cairns. "However, there are a number of considerations relating to the greenhouse gas emissions of international shipping. Roughly 80% of the emissions from the maritime sector are emitted by larger commercial vessels (i.e. Megawatt scale engines), where alternative solutions such as electric and fuel cell remain limited in energy density and/or cost. This challenge is compounded by the fact that the engines in these vessels typically remain in service for several decades.

“Ammonia represents an attractive solution, but significant challenges remain around slow combustion and the emissions of NOx, and it is these challenges we wish to address through research in fast burning and ultra-low NOx combustion systems.

“As a group, the MariNH3 consortium firmly believes that a mix of technologies will be required for the most effective decarbonization of the marine sector because there is no ‘silver bullet’ fuel or technology to shortcut the path to Net Zero.

“Ammonia is set to play a key role, but there is current concern with the approach being adopted by some marine engine manufacturers, which involves ammonia dual fueling, which is where some of the fuel oil (marine diesel) is replaced with ammonia as a retrofit solution. Typically, up to 40% diesel is still used in these engines, which will have consequences for local pollution, and limit the scope for decarbonization.

“The vision of the EPSRC MariNH3 program is therefore to investigate full decarbonization of marine transport emissions through multidisciplinary research focused on highly promising disruptive ammonia fueled engine concepts, which have the potential to allow full decarbonization, whilst minimizing pollution and end-use energy demand.

“Our goal is to develop the best technical solutions in parallel with appropriate acceptance criteria and policy, so that we can develop technologies and policies which are ‘right first time’ and appropriately scaled across the marine sector.
“The MariNH3 framework is based around a ‘technology agnostic’ approach to life cycle analysis to ensure that ammonia end-use is implemented appropriately. We wish to achieve this while developing the next generation of propulsion researchers, capable of adopting a technological and systems engineering approach to help steer and maintain the strong powertrain research community that we have in the UK.” 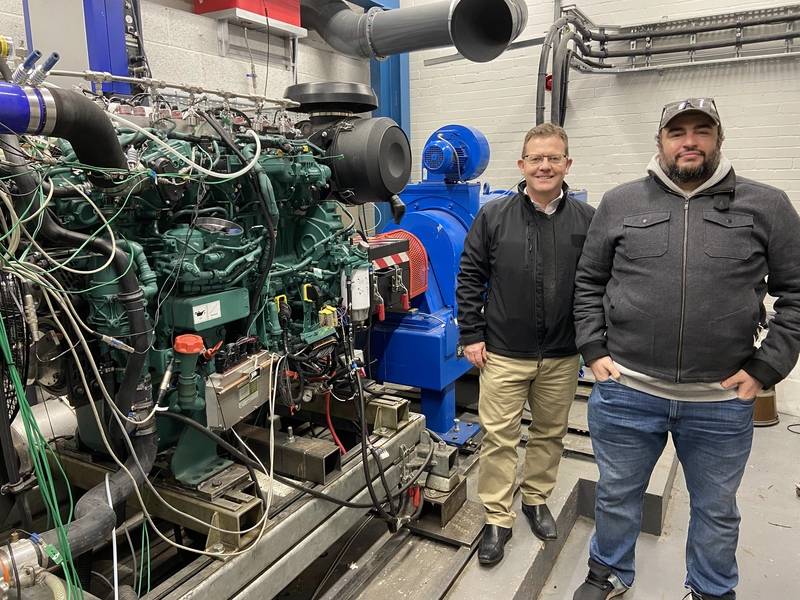 Image courtesy MariNH3 consortium/University of NottinghamWhy ammonia?
Green hydrogen, produced by the electrolysis of water using renewable energy, offers enormous potential in the decarbonization of the energy sector as a whole. As a fuel, the main advantage of hydrogen (H2) is that it does not contain carbon, so combustion emissions do not contain CO2 (greenhouse gas) or CO. However, when burned in air hydrogen does produce harmful nitrogen oxides.

With high flame speed and temperature, the combustion characteristics of hydrogen differs from conventional fuels, but the main challenges with hydrogen relate to its storage and distribution. On a weight basis, hydrogen has a higher energy content than conventional fuels, but on a volume basis the situation is reversed. Furthermore, the storage of hydrogen gas typically requires high-pressure tanks, and storage as a liquid requires cryogenic temperatures because the boiling point of hydrogen at one atmosphere pressure is minus 252.8°C. So, if the question is ‘how do we exploit the advantages of green hydrogen?’ the answer is: convert it to ammonia (NH3).

Ammonia has a higher energy density (12.7 MJ/L) than liquid hydrogen (8.5 MJ/L), and ammonia can be stored at a much less energy-intensive minus 33 °C or it can be pressurized to about ten times atmospheric pressure. Ammonia is also less flammable than hydrogen, although it has an unpleasant odor and is toxic - breathing low levels may cause irritation to the eyes, nose and throat. High levels of ammonia may cause burns and swelling in the airways, lung damage and can be fatal.

Hydrogen can be converted to ammonia via the Haber-Bosch process which reacts hydrogen with atmospheric nitrogen under pressure. Historically, this process has been employed to manufacture agricultural fertilizers using natural gas (fossil fuel) as the source of hydrogen. However, this process is energy intensive and produces high levels of carbon dioxide emissions.

In the past, ammonia has been regarded as a useful medium for the transport of energy, so that it can be cracked into nitrogen and hydrogen at the point of delivery. However, the potential for ammonia to be employed as a fuel in a number of different applications is now being urgently investigated.

It has been estimated that green ammonia will cost two to four times more to produce than conventional ammonia (steam reformation of methane in natural gas). Nevertheless, it is anticipated that green ammonia costs could drop significantly after the scaling up of production – assuming that ammonia powered engines can be developed successfully.

The International Maritime Organization (IMO) has adopted a new regulation to drive the decarbonization of global shipping. Scheduled to be enforced by 2023, New Regulation 28 mandates: “a linear reduction in the in-service carbon intensity of ships between 2023 and 2030, such that the global fleet achieves an average reduction of at least 40% by 2030 when compared with 2008”. The use of ammonia as a marine fuel is therefore being vigorously investigated by the sector.

MariNH3 research
The project’s practical research is being conducted at the University of Nottingham’s Powertrain Research Center in the Faculty of Engineering. This facility includes a broad range of resources for engine research, but the most relevant for this project are a new Volvo marine specification compression ignition (diesel) engine, a jet ignition engine and a comprehensive suite of Signal Group exhaust gas analyzers.

Liquid ammonia is stored in a tank at the research center and Research Fellow Dr Abdelrahman Hegab and Research Technician Nigel Sykes have installed a fuel supply line to the Volvo engine which draws vaporized ammonia from the tank. However, the combustion characteristics of ammonia differ greatly from conventional fuels, so the researchers are looking at ways to refine the technology while maximizing the efficiency with which energy is utilized and minimizing potentially harmful emissions.

Dr Hegab explains, “The burning velocity of ammonia is relatively low, so there is potential for unburned ammonia to pass through to the engine exhaust. For this reason, Signal Group has supplied us with their new S4 NEBULA, a continuous ammonia analyzer which employs tunable diode laser spectrometry (TDLS). This analyzer is deployed in conjunction with a comprehensive suite of Signal’s reference method analyzers to ensure that we are able to gain a full understanding of engine emissions under differing research conditions.”

Nitrogen and oxygen are the two main components of atmospheric air, but they do not react at ambient temperature. However, in the heat of combustion, the two gases react to form nitric oxide (NO) and nitrogen dioxide (NO2). This is an important consideration for the MariNH3 team because emissions of these gases (collectively known as NOx) have serious health and environmental effects. A S4 QUASAR (heated vacuum chemiluminescence gas analyzer) therefore continuously measures NOx, NO and NO2. It is also important to measure any organic carbon in the emissions, so a S4 SOLAR (flame ionization detector - FID) performs continuous VOC analysis. To complete the profile of exhaust gas analysis, a S4 PULSAR (Non-Dispersive Infrared - NDIR) multi-gas analyzer provides continuous measurements of carbon monoxide, carbon dioxide, and nitrous oxide. The PULSAR is also fitted with an oxygen sensor.

Ammonia has a higher absolute minimum ignition energy than traditional fuels, so the researchers are looking at ways to improve the combustion characteristics. For example, they are investigating the effects of co-firing with a small amount of hydrogen, as well as the use of diesel as a pilot fuel to promote ignition. In addition, they are also investigating the use of a jet ignition engine to promote the combustion event.

The combustion gas analyzers were supplied by Signal Group, and their James Clements says: “We have worked with the University’s Faculty of Engineering for many years, but we are particularly pleased to be able to help with the MariNH3 project. The world is desperate to achieve Net Zero as soon as possible, so this project is at the forefront of research to find solutions, and we are both delighted and honored to help.”