Well, 2021 was a disappointing year for us. As we said in our annual report, it was ‘a year with two faces.’ We had to report a loss for the first time in a long time in our company; a loss which was created by large provisions we had to take on three projects, including two offshore wind projects. One is the Greater Changhua project in Taiwan for Ørsted. The other one is the Saint-Brieuc project in France for Iberdrola. I’ll explain in detail a little bit later.

On the other side of the coin, we finished 2021 with a 4.4 billion Euro orderbook, which is a record orderbook for our company.

In 2020 we had a turnover of 630 million Euro for offshore wind, and with that the offshore wind business was, for the first time in the history of the company, the largest activity in our company, larger than dredging.

We saw a downturn in wind figures to 350 million Euros in ‘21. But I dare to say that this was an incidental event, associated with the operational issues we had on two projects.

If you look at the future, it is obvious that our (offshore) wind business will outpace all other businesses. So, we’re convinced that within wind, we’re going to see double digits growth figures in the entire industry.

The question is, who is going to build all these projects? Are there sufficient contractors prepared to take on all of these risks? I don’t know the answer at the moment, but we are predicting an unbalance between supply and demand during this decade.

If you ask me the projects we are tendering, I would say maybe 20 at this moment.

We recently announced that we are the preferred contractor on three large projects in Japan, which is a major step, for European contractors to go to Japan. These three contracts are not in our order book at the moment, but they have a value for us of more than a billion Euro. They are really large projects that will be built in ‘27, ‘28, ‘29 and 2030. So, there is a lead time of five years, tendering negotiations, getting your design ready, doing your engineering, doing your procurement, before you actually are going to install those projects.

I dare to say that the Saint-Brieuc project is the most complex foundation contract on an offshore wind park ever. We’re looking at soil which is granite. For this particular project it is a jackets project, not a monopile. We drill three pin piles where we are going to fix the jackets. Those pin piles are drilled in holes that are, on average, 25 meters deep.

We have a very experienced drilling subcontractor, the Bauer company, from Southern Germany. They have a lot of experience with drilling, particularly in the Alps.

So as you drill in this rock, one of the challenges is to ensure that the holes do not collapse while you are drilling. You have to keep the holes open, so as you drill, you immediately save the drilling hole with a casing.

When you finalize your drill, you remove your drilling tool and insert a pin pile; a permanent pin pile which will stick a few meters out from the bottom of the sea.

You have to grout the pin pile to make it firm. So, we grout and then we retrieve the casing. When we leave, there are just three small pinnacles which stick out of the bottom.

Then the next campaign is, with a crane vessel, you place the jacket on top of the three pins sticking out of the sea bottom. It’s an extremely complex (process and) project, and we encountered major issues in ‘21 on the project.

There was opposition by the local fishermen. We encountered soil that was even more difficult than the client had told us. So, we had to adjust the drilling tools to make it more suitable for this particular rock. We had to do a drill bit conversion. We have restarted the project in early March and – ‘knock on wood’ – so far things are going pretty well.

I would say it’s more difficult. The main reason for that is the logistics of bringing in those massive turbines and monopiles on a lake is quite challenging.

Second, the traditional tool to build an offshore wind project on the sea is a wind turbine insulation vessel. But here on this lake the average water depth is about 15 feet. So, the standard means were not available.

So we built a modular barge we called the ‘barge soccer pitch,’ because it was as big as a soccer field, and we put a massive crane on the barge. (For a project like this you need to build) bespoke equipment, which requires a lot of engineering and ingenuity.

Overall it was an extremely successful project; we finished last year, and it’s been generating a lot of electricity for the province of Fryslan. 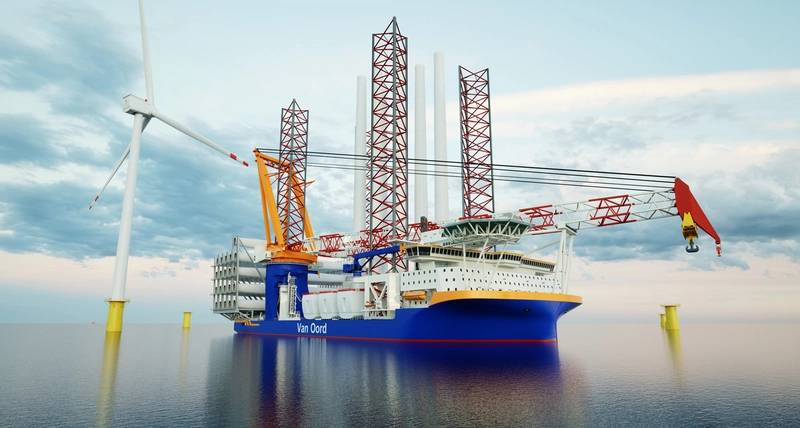 Artist impression of the Borreas, currently under construction in China, expected for delivery in 2024. Image courtesy Van Oord

Let me tell you a little bit about the history first. We built our first turbine installation vessel in 2002, a vessel called Jumping Jack, which has been sold.

In 2012, we contracted the vessel Aeolus, and it became operational in 2015. At that time, we were building turbines up to 4MW.

(At the time) we felt four megawatts was big because when we started in 2002, the average size of the turbines was two megawatts.

So between 2002 and 2014, the size (of the turbines doubled) from two megawatts to four megawatts. When we finalized our first project, which was the Gemini project, we suddenly realized that the average size of turbines had gone up to 8MW.

So we had to do a crane conversion on this vessel, installing a new Huisman crane, which made the vessel suitable for 10 to 11MW turbines.

Today, we’re in the midst of building 11MW turbines. But I can tell you, the Hollandse Kust Noord (HKN) project, which we are going to build for Shell, we’re going to see 14MW turbines.

So this coming winter, we’re going to do another crane conversion.

We believe that somewhere around 2035 ... and this is obviously the feedback we have from the people like Siemens, Gamesa, Vestas and GE, that around 2035, we’ll be working with a 20MW turbine.

So we contracted this vessel and we put on a crane, with a vision that by 2035, we would be completely ready with this vessel, to build this generation (of wind turbines which today) does not exist.

It’s the largest turbine installation vessel in the world. But we really believe, if you want to invest for more than 10 years, there is no other choice. 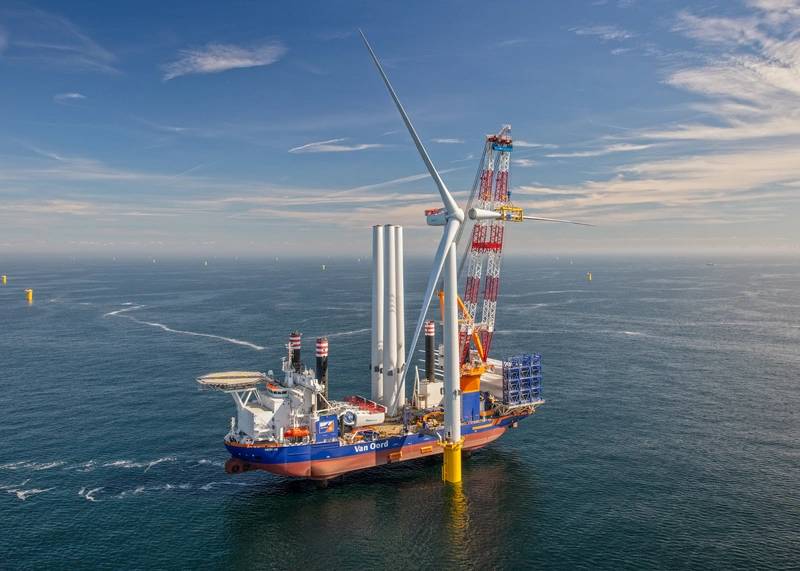 "In 2012, we contracted the vessel Aeolus, and it became operational in 2015. At that time, we were building turbines up to 4MW.
(At the time) we felt four megawatts was big because when we started in 2002, the average size of the turbines was two megawatts.
So between 2002 and 2014, the size (of the turbines doubled) from two megawatts to four megawatts. When we finalized our first project, which was the Gemini project, we suddenly realized that the average size of turbines had gone up to 8MW." Image courtesy Van Oord

This company has made a pledge that by 2050, in line with the Paris Agreement, we will be carbon neutral. That means that we only have 28 years to go.

Obviously the key emission within our company is the emission from the engines on our vessels. That means that we have to make two choices.

One, we have to choose the type of engine suitable for lower emission fuels or E-fuels. Two, we have to make a decision, with respect to choice of fuel, and the jury is still out. We don’t know whether it’s going to be methanol, ammonia. It could be hydrogen.

We have just finalized a series of three dredgers running on LNG. Where the footprint of LNG is much better than marine fuel, marine diesel, we see LNG as a transition fuel.

With respect to offshore wind, we see that our customers are extremely motivated to contract with contractors with a low emission solution.

So you make an extra investment to make those vessels able to run on those E-fuels.

With respect to the Boreas, particularly, we have made a decision that we’re going to make her dual fuel and suitable for methanol. Obviously, green methanol is, at the moment, only limited available. But we expect that between now and 2030, that a large infrastructure of green methanol will be built. We also have fuel tanks for green methanol built in the vessel.

With respect to the Calypso, we have the engines suitable for E-fuels. On this we will wait on the decision on what type of fuel we’re going to use.

One other fuel I’ve not yet mentioned is biofuels. On our present dredgers, which have traditional engines, we carry out more and more projects with biofuels.

We have a number of people around here, in Northwest Europe now, who produce biofuels. Neste, from Finland, for example, is a big player in biofuels.

Shell Oil has just made an announcement that they’re going to build here in Rotterdam, at the largest refinery, also a large biofuel factory.

In the future I would say fuel technology, on the one hand, phasing out marine diesel with the existing engines, with biofuels. On the other hand, new vessels, making them suitable for the E-fuels. Whether it be ammonia or methanol, I don’t know, but I think that will be our future.

We’re living in a time of transition, and you only survive when you adapt. There is a lot of uncertainty in the market (regarding the) direction we’re going. But it’s clear that, driven by the Paris Agreement, we have to move to carbon neutrality. That’s going to change the entire industry. I think what it means, is that we have to phase out all vessels; we have to build new vessels.

What is the largest challenge? I would say it’s a cultural challenge. That mindset of your people needs to change.

We cannot continue the way we have in the past. We need to build new vessels, which (today) is quite a challenge, because new build prices have gone up considerably, and you need to find a proper shipyards to build your new vessels. I expect in the next decades a massive wave of investments in all sorts of new vessels, whether it be container vessels, bulkers, tankers, dredgers, wind turbine installation vessels, which are suitable for this carbon neutral era. 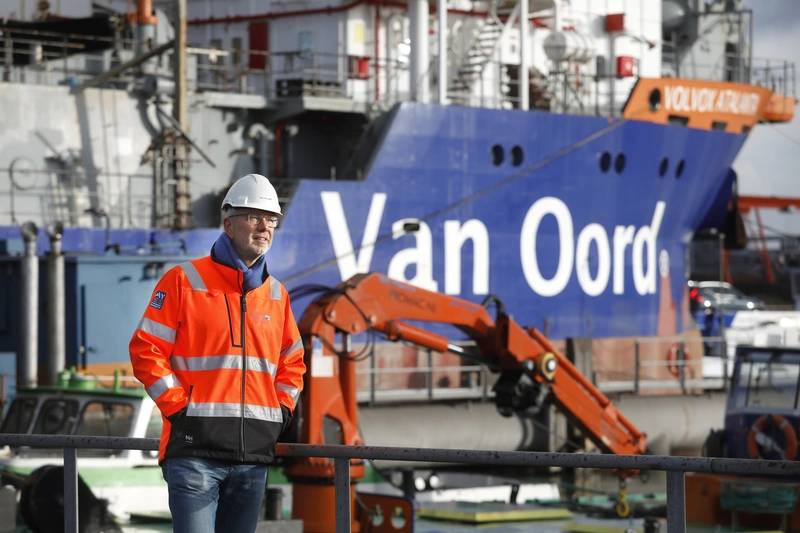 “I expect in the next decades a massive wave of investments in all sorts of new vessels.”
Pieter van Oord, CEO, Van Oord