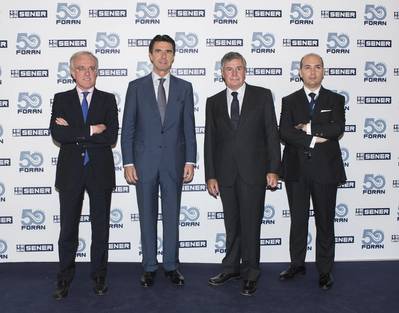 SENER has commemorated the 50th anniversary of FORAN, its CAD/CAM/CAE system for designing naval vessels and marine structures, created by SENER’s cofounder José Manuel de Sendagorta in the 1960s. Today it is the world leader in marine technology and, since its inception, it has served as the prime example of SENER’s ability to innovate and export.

The event was held at Madrid’s Casino on the evening of Thursday, June 11, under the auspices of SENER’s founder and Honorary President, Enrique de Sendagorta; the President of SENER, Jorge Sendagorta; the Managing Director of SENER, Jorge Unda; and the Marine General Manager of SENER, Rafael de Góngora. It was also attended by the Spanish Minister of Industry, Energy and Tourism, José Manuel Soria, Spanish FORAN clients such as Navantia, Gondán, Abance, Construcciones Navales del Norte, Aries, Ghenova, Seaplace and the Spanish Ministry of Defense, and international FORAN clients from the U.K., Japan, Singapore, Russia, Turkey and Brazil. The event also served as homage to the people at SENER who made it possible for this system to be continuously reinvented and remain at the forefront of technology.
During the event, the President of SENER declared that “FORAN has been one of the driving forces showing us the way towards the international Group that we are today . . . Innovation is the first cornerstone of the success of our internationalization. For this reason, FORAN, always one of SENER’s most cutting-edge products, has been spearheading our globalization for so many years.” He added that FORAN is also exemplary of SENER’s investment strategy, because “more than 100 people are continuously working to develop FORAN even further, thereby ensuring that we maintain our position of excellence which allows us to serve the needs of the most demanding clients in the Marine sector. FORAN is therefore an excellent example of our corporate strategy, which we call 3i, which represents the three pillars of Innovation, Internationalization and Investment.”
Minister José Manuel Soria emphasized that FORAN is an important example of the Spanish industry’s ability to innovate and export. In fact, it was for this very reason that the Minister of Industry awarded it the Prince Felipe Award for Business Excellence in 2008. FORAN has also won two awards from the Spanish Maritime Cluster: the Miguel Pardo Prize (2009) and the Technology and Innovation Prize (2013).
The Marine General Manager expressed his admiration, “firstly, for the people who first came up with the idea and began to develop this technology, and secondly, for the people who continue to develop it today and keep it at the cutting edge of technology . . . Let’s hope that we are always able to retain our spirit of innovation, of overcoming challenges and of satisfaction for a job well done that has marked the development of FORAN and indeed all of SENER’s activities.” He added that, as a result of this team effort, new versions of the system are regularly launched and the “latest one, version 80, will be released in just a few weeks. This version, which introduces many new features and revamps existing ones, represents a major milestone as a solution that integrates tools far beyond the scope of standard marine design. Thus, FORAN, the marine CAD/CAM system that was the first to function with a single database, the first to have a version for the Windows operating system, and the pioneer in the use of relational databases, will now be the first marine CAD/CAM system to provide total integration with product lifecycle management systems.”
FORAN, an acronym for FORmas ANalíticas (ANalytical FORms), is an integrated CAD system for the design, construction and engineering of all kinds of vessels and marine structures, from sailboats to tug boats, military vessels, passenger ships, roll-on/roll-off vessels, fishing boats and cargo ships, as well as offshore platforms. It allows for the creation of a detailed virtual 3D model of the ship, automatically providing all the information required for its manufacture and assembly. As the only marine software created by and for marine engineers to solve their own problems, its goal has always been to automate the production process as much as possible in order to make better quality vessels at a lower cost and in shorter timeframes. To achieve this, from the outset FORAN was conceived as a highly versatile and seamlessly integrated modular system.
FORAN is currently used in 40 countries across the world and on every major continent. It is the standard working tool in Spain, where the technology is used almost uniformly in technical offices and shipyards throughout the country. A leading system in Europe, it is also present in shipyards in Latin America, the United States and the Middle East. In the last few years, FORAN resolutely arrived in Asia, where SENER has opened offices in China, Japan and South Korea. Almost 90 percent of the entire world’s civil ship building industry is concentrated in these countries and in the short term they will be FORAN’s principal market, along with the military marine sector. The offshore sector will also be an area of growth in the coming years.
Some of the signature projects for FORAN in recent years include Sanoyas’s Bulk Carrier Spring Aeolian; the world’s largest PANAMAX bulk cargo vessel (sized to go through the Panama Canal); Navantia’s TEXACO Captain FPSO with storage for 550,000 barrels; the world’s largest dredger, the Leiv Eiriksson, for Construcciones Navales del Norte, with 46,000 m3 capacity; the aircraft carrier HMS Queen Elizabeth and the Successor series of submarines, both built by BAE Systems for the British Royal Navy. The latter is the largest engineering project in Europe over the last decade.
• BAE Systems • Brazil • British Royal Navy