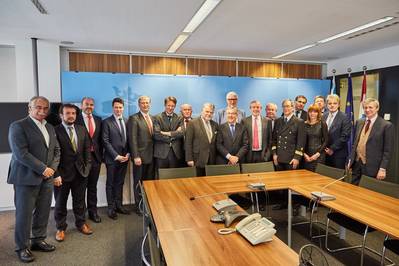 The Maritime Cluster concept is blooming across Europe, leading to the reinforcement of the ENMC
Given the success of the first meeting he had in 2015 with the chairmen of the national maritime clusters forming the ENMC, Commissioner Vella expressed the wish to reiterate this high-level forum every year. In that spirit, the 2016 two-hours meeting took place in Luxembourg last week in the presence of eleven maritime clusters from Belgium, Bulgaria, Finland, France, Italy, Luxembourg, Poland, Portugal, Spain, the Netherlands and the United Kingdom.
Main topics of the agenda discussed with Commissioner Vella were the follow-up of the International Ocean Governance, the European Fund for Strategic Investments (ie “Juncker Plan”), the stumbling blocks experienced by maritime professionals and the possible work priorities of DG Mare in 2017 as seen by the various national clusters and the ENMC itself.
ENMC Chairman stressed, “We are very grateful that Commissioner Vella took the time to hear representatives of the European blue economy. With regards to international governance, we thanked the Commission to have heard our previous appeal to endorse and actively support the idea of a special report on the oceans by the IPCC. Besides wee stressed again the need to have international and not regional solutions when it comes to maritime regulation, hence insisting on the paramount role of the IMO.”
Then several clusters mentioned a series of specific and concrete stumbling points their member companies faced and reported. ENMC will now liaise with Vella’s Cabinet to ensure a proper follow-up.
Again the participating clusters enquired about the possibility for the European Commission to setup a program to support the emergence of pan-European Clusters and to which the ENMC could apply. Indeed, according to the Commission and very much to Vella’s regret, the current rules do not allow to provide seed capital in order to financially support transverse clusters of clusters and only apply for narrower initiatives.
ENMC Chairman commented: “Maritime clusters across Europe have a proven track record and are indispensable facilitators for companies. There is a very good opportunity to replicate this success at European level via the ENMC. If the existing rules are not appropriate or working bad, we should not be afraid to change them.”
Hence make inappropriate rules change has now become the first fight of the ENMC.
ENMC will soon welcome the newly created Maltese Maritime Cluster. The Malta Maritime Forum (MMF) which was set up in October 2015, and is currently gathering 40 companies and institutions, is the next national maritime cluster which will officially join the European Network of Maritime Clusters on the occasion of the yearly meeting to be held in October in Southampton. The MMF is chaired by former European Commissioner for Maritime Affairs and Fisheries Dr. Joe Borg.
• Belgium • Bulgaria • Europe