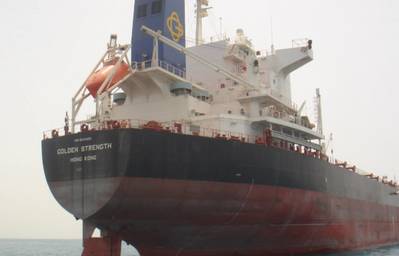 Billionaire investor John Fredriksen's dry bulk shipping firm Golden Ocean plans to raise $200 million in fresh equity as it continues to face weak markets for its vessels, the company said on Thursday.
Fredriksen's investment vehicle Hemen Holding, which owns 43.1 percent of Golden Ocean, will invest an amount that is at least equal to its current stake, and other leading shareholders plan to do the same, Golden Ocean added.
In return, the company's banks have agreed to defer loan repayments of $165 million until September 2018.
The shipping firm separately announced a net loss of $69.3 million for the fourth quarter of 2015 and said it would not pay a dividend.
The company's shares, which are listed in New York and Oslo, rose by 2.6 percent in early trade in Europe.
(Reporting by Terje Solsvik, editing by Stine Jacobsen)
• Europe • Golden Ocean • John Fredriksen