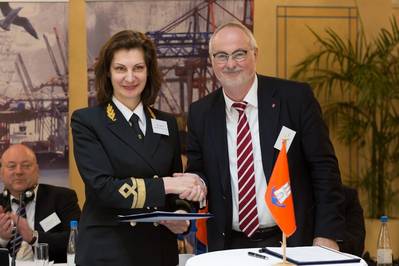 In early April, during the traditional German week in St. Petersburg, a workshop was run with the accent on ‘Digitalization in the port sector and logistics’. It was co-organized by Port of Hamburg Marketing (HHM), the German-Russian chamber of commerce and the German business Eastern-Europe association. The event also provided a suitable backdrop signing a partnersship and cooperation agreement between Port of Hamburg Marketing and the Admiral Makarov State University for Sea and Inland Waterway Shipping.
The ports in Hamburg and St. Petersburg both lie very close to the cities. As universal ports they have similar structures and face comparable challenges managing traffic and logistics processes. The invitation to the ‘Digitalisation in the port sector and logistics’ workshop in St. Petersburg was taken up by more than 130 participants. After Ingo Egloff, Joint CEO of Hamburg Marketing welcomed them and the guests of honour, Hamburg’s First Mayor Olaf Scholz stressed that despite the ongoing strained political relationship, foreign trade between Russia and the Port of Hamburg has once again developed positively. The mutual exchange of information and the business relationships between the two significant port cities are being successfully built up with the support of the HHM Representative Office in St. Petersburg. The German Consul-General in St. Petersburg, Eltje Aderhold Ph.D. was pleased with the well-structured workshop programme and the signed cooperation agreement.
The advantages of digitalization for the port sector and logistics were explained to the numerous Russian conference participants. Taking the Port of Hamburg and its transport and logistics companies as an example, Lutz Birke from Hamburg Port Authority (HPA) presented the ‘smartPORT’ project. He explained that HPA began very early, not only to develop innovative projects, but to test them in everyday working conditions in the port, then implementing them long-term. Since 2013, a total of more than 30 ‘smartPORT’ projects have been realized by HPA. Freight and traffic now flow much more smoothly than before. Next, Torsten Neubert from Hamburg Port Consulting (HPC) reported on the opportunities and challenges when automating handling terminals, with a special focus on German-Russian cooperation projects. In their lectures Elena Grebenshikova from the Solvo Group and Veronika Zueva with her colleague Igor Vivsyny from Kühne+Nagel presented how high-powered IT solutions can be applied today in logistics, terminal control and transport processes.
In the closing panel discussion, facilitated by Ingo Egloff, all of the panellists were agreed that today’s modern ports are innovation drivers in their own regions, needing very good connections to research institutes and innovative companies to achieve further progress. To ensure a highly-qualified upcoming generation for the port and logistics sectors, educational institutions such as universities of applied science and the maritime-oriented Admiral Makarov State University in St. Petersburg are really important cornerstones.
Ingo Egloff and Natalia Kapkajewa, head of the Port of Hamburg representative office in St. Petersburg, immediately received very positive workshop feedback from event participants during networking after the presentation programme. “The good, long cooperation between the two port cities is an excellent basis for organizing future workshops on the topics of logistics, the environment and IT. By presenting worthwhile best practice examples from Hamburg, we are also promoting interaction and transfer of know-how between Hamburg and St. Petersburg“, stated Natalia Kapkajewa.
Since Hamburg and St. Petersburg are this year celebrating their sixtieth city-twinning anniversary, Olaf Scholz, the First Mayor of the Free and Hanseatic City of Hamburg, under-secretary of state Rolf Bösinger Ph.D. and further representatives from Hamburg companies and institutions took part in the event. Among them, there were numerous guests of honour from Hamburg and St. Petersburg, as well as the German Consul-General, Eltje Aderhold Ph.D. In his welcoming speech Olaf Scholz stressed the similarities of the cities concerning their port districts, also welcoming signing the cooperation agreement between Port of Hamburg Marketing and the Admiral Makarov State University for Sea and Inland Waterway Shipping. The ports right at the heart of both cities have hallmarked the attitude to life and the identity of our cities for centuries. In Hamburg we have now added the Elbe Philharmonic Hall that you can visit as an interactive model at the Hermitage Museum in St. Petersburg,” said Scholz. Both port cities are characterized by their openness and international flair, as well as their shared interest in real cooperation, promoting maritime vocational training and exchanging experience.
• Hamburg Marketing • Hamburg Port Authority • Ingo Egloff