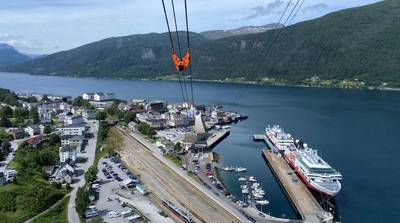 The Port of Molde and Romsdal IKS received NOK 13.5 million in support for the construction of shore power at Tindekaia in Åndalsnes. The plan is to offer shore power to the cruise ships that dock there. In addition, Enova enters with state support for four other facilities along the coast.

This is Enova's 13th call for investment support for shore power since 2016. Through these rounds, Enova has provided support for 119 shore power projects with more than NOK 842 million.

"Land power is an important step in the direction of emission-free sea transport in that the ships cut large emissions when they are at the quay. Now it is also gratifying to be able to contribute to cruise traffic into Norwegian fjords being able to reduce their emissions," said Rune Holmen, marketing manager for maritime transport at Enova.

The Port of Molde and Romsdal have previously been awarded support from Enova for a preliminary project for a study of onshore power plants at Tindekaia in Åndalsnes. Now the company has taken a step further.

"We look forward to realizing this project. The support from Enova is absolutely crucial for success in our work to build a future-oriented port in line with the green shift," said port director Olav Akselvoll in Molde and Romsdal Havn IKS. In December 2021, Rauma was awarded the Innovation Norway brand as a sustainable destination, and a shore-side power plant will be an important part of the goal of developing a sustainable destination.

The onshore power plants will be operational by July 2024.

"We now see that more and more vessels are being built and rebuilt so that it can receive electricity from land. This will reduce climate emissions both at the quay and during sailing. The maritime industry in Norway is at the forefront of the green transition, but we have a long way to go, here too," Holmen said.

Enova has supported shore power in Norwegian ports since 2016. A further call is now planned for the program in 2022, but at the same time Enova will carry out an evaluation of the support programs aimed at shore power, which also includes support for pilot projects and support for adaptation of vessels for shore power.

"This evaluation, which will take place in dialogue with market participants, will give us good answers on the course further," Holmen said.