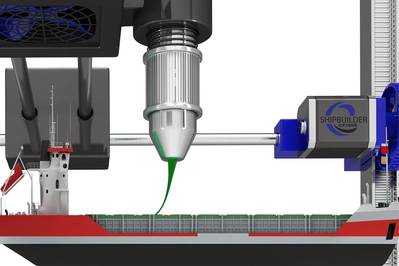 3D printing will cause so much change in the shipbuilding and shipping sector that the industry must completely alter its approach toward designing and building ships.

This is the conclusion of NISS (National Institute for Shipping and Shipbuilding), that has developed a blueprint for the maritime sector until 2050.

Geert Schouten, director at Shipbuilder, was part of the team responsible for this blueprint.

“3D printing is moving at a rapid pace. It is now possible to, wherever a product is required, to print it on site. Even ships will be partly 3D printed in the future,” Schouten said.

“The combination 3D printing, digitalization and robotization is developing very fast,” Schouten said. “Others sectors are moving ahead quite fast already, so I expect some trendsetters to stand up in the maritime sector soon too. These trendsetters will completely renew the maritime sector. Real innovators, maritime game changers. The first digital shipbuilders will conquer the maritime world quicker than people think. They will leverage digitalization, robotization and 3D printing successfully.

These developments require a whole new approach to the supply of digital information. “It often surprises me how much the maritime sector still relies on loose files and email. Those who hang on to the use of this way of working will get in trouble. Within projects often thousands of emails are sent back and forth with 30 percent failure costs as a result,” Schouten explained. “We must put an end to this. The reason being that no form of automation can deal with a working method so error-prone. No matter how smart you work with emails and loose documents, they will increasingly become an insufficient solution.”

Schouten often delivers workshops around developing a vision in the maritime sector. He said, “Developments in IT allow for plenty of new methods. Us engineers then have to facilitate those methods. We illustrate how these developments will cause disruption in the maritime sector. During my workshops I often hear the remark that it will take a long time for this disruption to take place, for example because 3D printers really can’t print a ship. That is an incorrect way of thinking, because it is based on the current possibilities for designing and building ships. With a completely different approach to design and building, many parts of a ship can be 3D printed. Digitalization, robotization and 3D printing will successfully join forces here."

“During my workshops I often get the question when these innovations become available. The answer is simple: you can take action now, as the techniques are readily available. Our software Shipbuilder combines several of these existing techniques. Virtual reality, multi disciplinary cooperation among the different project partners with the same real time data set, RFID labels, design and logistics information easily bundled; that’s what our Shipbuilder software is already capable of. We make the combination 3D printing, digitalization and robotization possible with one software program: Shipbuilder.”