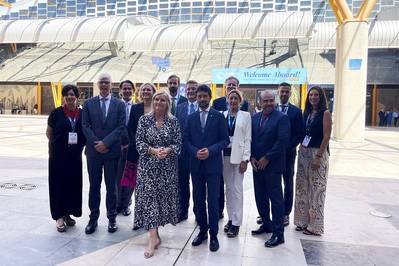 The Port of Barcelona said it has created a working group including cruise companies and terminals in order to accelerate plans to establish shore power connections for cruise ships docked in the Spanish seaport, in an effort to reduce vessel emissions.

The creation of this working group is part of a collaboration agreement signed by the Port of Barcelona, Barcelona Cruise Port, Carnival Corp & PLC, Royal Caribbean Group, MSC Cruises, NCL Holding LTD, Viking Cruises and Virgin Voyages aiming to actively collaborate in order to execute the electricity supply project on the docks of the port area. This is "an important step that confirms the commitment of the cruise community to the city of Barcelona and to society as a whole", as Damià Calvet, president of the Port of Barcelona, highlighted during the presentation of the agreement, which took place at the Seatrade Cruise Med 2022 fair.

While the connection of ships to the general electricity grid once they are docked, using clean energy that is certified 100% renewable, will significantly eliminate emissions, the collaboration between the public and private sectors will also make it possible to comply with the European requirements for the availability of electrical connection on shore for ships in 2030.

Marie-Caroline Laurent, representing the sector, has ensured the "agreement between the port of Barcelona and cruise operators is an important example of how collaboration is accelerating progress towards achieving our ambitious climate targets. Equipping our ships to connect to shoreside electricity is sustainable tourism in action for the benefit of the local communities we visit."

According to calculations by the Port of Barcelona, the electrification of all the cruise berths, the Prat wharf, and the ferry terminals of the Sant Bertran dock and the Costa wharf will eliminate 66,000 tons of CO2 and 1,234 tons of NOx emissions from port activity. This means cutting 38% of the NOx and CO2 emitted by ships during their stay at the dock and that 22% of NOx and CO2 emissions from all port activity will be eliminated.

Nexigen, the name given to the project to electrify the Port of Barcelona's docks, requires an investment of 110 million euros and is a key element in achieving the goal of being a climate-neutral port by 2050. The first cruise ships will be connected to the port power grid in 2026.