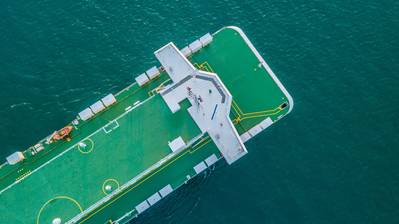 A consortium led by Toyota Tsusho Corp, a unit of Japan's Toyota Group, signed a contract on Thursday to set up and operate a roll-on, roll-off vehicle terminal at East Port Said in Egypt, the Suez Canal Economic Zone (SCZone) said.

The consortium, which also includes Bollore Africa Logistics and Nippon Yusen Kaisha, will develop and operate a 600-metre quay and a new 21.2-hectare terminal for the import, export and transshipment of vehicles, an SCZone statement said.

It will invest $150 million in equipment and infrastructure to enable the terminal to handle 800,000 vehicles a year, plus an annual $233 million for the operating concession, the statement quoted SCZone chairman Yehia Zaki as saying.

East Port Said lies along the Mediterranean entrance to the Suez Canal, which is the fastest shipping route between Europe and Asia and one of the Egyptian government's main sources of foreign currency.

The government hopes to turn East Port Said into a major transshipment hub, meaning goods will flow through the facility on the way to other destinations.