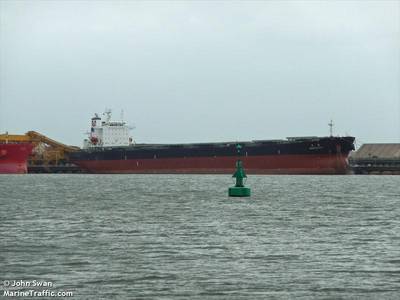 The Cemtex Pioneer, a vessel carrying U.S. soybeans that was caught up in the China-U.S. trade row, has left east China's port of Nantong near Shanghai, according to shipping data on Thomson Reuters Eikon on Sunday.

The vessel's draft is now at 58 percent of its maximum, indicating that it has unloaded its cargo, according to the Eikon data, which showed the ship now headed for the Australian port of Abbot Point.

Cemtex Pioneer, which was previously fully laden in port, is the third vessel to unload a U.S. soybean cargo in China over the past week after sitting at anchor off the coast since July.

The vessels Peak Pegasus and Star Jennifer earlier unloaded their cargoes at the northeastern port of Dalian.

All three cargoes incur a 25 percent import tariff on U.S. soybean imposed by Beijing from July 6.