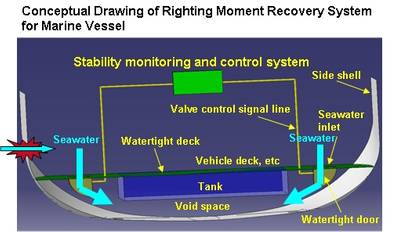 Mitsubishi Heavy Industries, Ltd. (MHI) has developed a system to enhance the damage stability of ships, enabling reduction in capsizing risk, as well as a roll-on/roll-off (RO/RO) ship* equipped with the new system. The company has already received an order for the newly equipped vessel from Nippon Shipping Co., Ltd., a group company of Nippon Express Co., Ltd. MHI proprietarily developed the system in response to the strengthening of regulations on ship stability during navigation in January 2009, based on revisions to the International Convention for the Safety of Life at Sea (SOLAS Convention) adopted at a meeting of the International Maritime Organization (IMO) in 1974. Going forward MHI will focus on marketing activities to attract orders for high-end ships equipped with the new system. At the same time, the company will also boost external provision of its environment-related technologies for such ships in a quest to expand its engineering business.

MHI is targeting installation of its newly patented righting moment recovery system on new ships to which the aforementioned regulations apply: namely, RO/RO ships, pure car and truck carriers (PCTC) and ferries. With such ships in mind, MHI developed the system with an emphasis on low cost. If the ship's hull is damaged during navigation, the new system enables prompt conveyance of any flooded seawater into void spaces in the ship's bottom, thereby reducing capsizing risk through enhancement of righting momentum by quickly lowering the ship's center of gravity.

MHI's system secures the void spaces near the ship's bottom by making use of spaces allocated to other functions: e.g. fin stabilizer rooms, duct keels and ballast water tanks. Holes and watertight covers are provided to feed the seawater into the void spaces, and pipes are in place to serve as air vents. Together the system enables prompt water filling and lowering of the gravity center to cope with emergencies such as damage to the ship's hull. The system not only eliminates the need to divide the vehicle deck area into small compartments but also facilitates smoother vehicle maneuvering within the ship. In this way, no vehicle carrying capacity is sacrificed as a result of the strengthened regulations.

The 170-meter-long RO/RO ship on order is capable of traveling at a speed of 23 knots, carrying about 170 trailer chassis and 100 passenger cars. The ship consumes approximately 10% less fuel than existing RO/RO ships in the same class. It will be built at MHI's Shimonoseki Shipyard & Machinery Works in Shimonoseki City, Yamaguchi Prefecture. Delivery is slated for March 2013.

Amidst today's entrenched oversupply trend in the ship market in the wake of the sharp decline in new shipbuilding arising mainly from the global financial crisis, MHI has adopted a growth strategy in its shipbuilding and steel structures business focused on a) specialization in high-end products and b) strengthening of engineering business so as to provide proprietary technologies backed by patented innovations to other companies both in Japan and abroad. In line with that initiative, effective January 1 the company established a new "Engineering Business Department" within its Shipbuilding & Ocean Development business headquarters.

Two promising technologies in particular are expected to contribute to expansion of the company's engineering business. One is the "Mitsubishi Air Lubrication System (MALS)," an innovation that reduces frictional resistance between a vessel's hull and seawater using air bubbles produced at the vessel bottom, thereby enabling significant energy savings and reduction in CO2 emissions. The other is a proprietary technology for vessels equipped with a ballast water treatment system to comply with the Ballast Water Management Convention, an international agreement requiring installation of a system to purify ballast water prior to its discharge from the ship. Leveraging these and other advanced technologies, MHI is now actively promoting its engineering business for both new ships and conversion of existing ships.

The company also sees its new righting moment recovery system as another highly promising technology that will enable differentiation of MHI from its competitors and intends to conduct proposal-type business development activities aggressively.

*Note: A roll-on/roll-off ship is a vessel designed to carry wheeled cargo such as automobiles, truck trailers, etc. that permits direct driving of such vehicles on and off the ship on their own wheels. This feature enables swift loading of such cargo even at ports not equipped with cranes and other conventional hoisting devices. RO/RO ships today constitute the mainstream of Japan's cargo transport fleet.