Surge in Traffic Between Hamburg and Poland 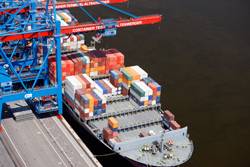 In the first half of 2011, seaborne container traffic between Hamburg and Poland experienced a particular surge by 38 per cent, to 114,000 TEU.

In this context, imports and exports from/to Poland are very well balanced at 56,000 TEU and 58,000 TEU, respectively. With a volume of 2.6 million tons of seaborne cargo in the year 2010, Hamburg is one of the most significant North Range ports for Poland.

The gratifying trend in container traffic in the first half of 2011 was the subject of a conference in Warsaw organised jointly by the Port of Hamburg Marketing Representative Office in Warsaw, emerpress (a specialist publishing house for logistics and transport), and ECB (European Business Centrum), an organiser of specialist congresses, at the end of August. The conference was opened by Secretary of State Tadeusz Jarmuziewicz, Michael Kern, Director of the German-Polish Chamber of Commerce, Jacek Piechota, President of the Polish-Ukrainian Chamber of Commerce and his Ukrainian deputy Oleg Dubish. Against the backdrop of the introduction of an electronic toll in Poland, at this event the potential and prospects of hinterland transport of Germany, Poland and Ukraine were discussed.

At the conference the Hamburg-based companies Polzug Intermodal, GERLACH and Porath Customs Agents presented the requirements relating to customs law associated with the introduction of the electronic toll. On 1 September the customs agency Porath Customs opened a branch office in Gdynia, reacting to the increasing level of demand for professional customs management in Poland.

As the easternmost port of the North Range, Hamburg offers ideal connections via Kiel Canal into the Baltic Sea and, with more than 150 weekly feeder departures, 15 to 20 to Poland, the port has the densest feeder network in the region. The shipping company Green Feeder is scheduled to launch a new link between Hamburg, Finland and Poland starting in September with calling at the ports of Gdynia and Gdansk and in Finland, Helsinki and Kotka. Other feeder services providers are CMA CGM, APL, OOCL, Unifeeder, Team Lines and Delta Shipping. Import cargo from Poland include coal, meat (refrigerated cargo), furniture, other foodstuffs and chemical products and feedstocks. On the export side, animal feed, other finished productions, other foodstuffs, clothing and textiles as well as chemical products and feedstocks predominate.