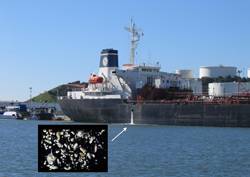 Invasive species have hitchhiked to the U.S. on cargo ships for centuries, but the method U.S. regulators most rely on to keep them out is not equally effective across coasts. Ecologists from the Smithsonian Environmental Research Center have found that ports on the East Coast and the Gulf of Mexico are significantly less protected than ports on the West Coast. Invaders are frequently introduced across oceans and along coastlines through the ballast water in ship hulls, water that often includes plankton and larval stages of marine and estuarine species. Large vessels need this water for balance as they load and unload cargo. However, by dumping ballast water in their ports of entry, they accidentally bring in new species that can alter or damage the local ecosystem. In 2004 policymakers thought they had found a solution: have cargo vessels exchange their ballast water in the open ocean, at least 200 nautical miles from land. This method, called “open-ocean exchange,” flushes out or kills potential invaders by exchanging coastal water for water from the deep ocean.
But some ships do not use the practice and many more cannot without veering drastically off course. In perhaps the most comprehensive study to date, Whitman Miller and a team of scientists from SERC looked at all international ships entering the contiguous U.S. over three years. Published today in the journal BioScience, the study analyzed approximately 105,000 vessel reports from January 2005 to December 2007. While most ships opted not to discharge their ballast water at all, a substantial number continued to dump unexchanged or improperly exchanged water into their ports of entry.
Not all coasts are affected equally. The Gulf of Mexico and the East Coast received much larger fractions of unexchanged ballast water than the West Coast. Roughly 5 percent of the ballast water discharged on the West Coast had not undergone open-ocean exchange. By contrast 21 percent of the discharged water in the Gulf and 23 percent on the East Coast went unexchanged.
Much of the problem comes down to simple geography. Depending on a ship’s transit route, it may not have the time or space to conduct open-ocean exchange. A mere 24 percent of the ballast water discharged by ships journeying to U.S. ports along coastal routes, from Central or South America, for example, underwent open-ocean exchange. In contrast 91 percent of ballast water discharge by transoceanic shipping was exchanged in the open ocean, where ships have more opportunities to manage their water properly. Because so many of their incoming ships do not pass through the open ocean, ports in the Gulf and East Coast receive more potentially harmful water.
The vast discrepancies point to the need for another solution, ecologists say. If ships could treat their ballast water on board without having to journey to the open ocean, every coast would be safer.
“The Gulf of Mexico coast receives more overseas ballast water discharge than the East or West coasts, and most of this water is either unexchanged or exchanged inside coastal waters,” said Miller. “Given the geographic constraints of shipping, and the complexity of the invasion process, it is clear that we need to move to onboard ballast water treatment technologies that will allow ships to operate anywhere in the world without fear of releasing harmful invasive species.”