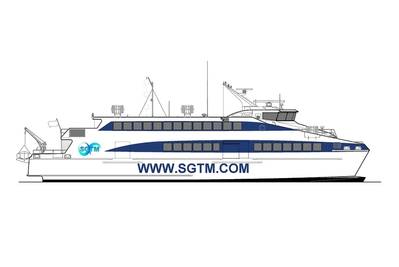 The Passenger Express 41 to be constructed by Austal’s shipyard in Vietnam will accommodate 400 passengers and 20 tonnes of cargo over 2 decks. (Image: Austal)

The new vessel is based on Austal Australia designed vessel, with customer defined design modifications to be undertaken in Vietnam before construction commences there by March, 2020 with delivery approximately one year later.

Austal Chief Executive Officer David Singleton said the new contract was welcome as Austal continued to build on its investment in facilities and people in the company’s new Vietnam shipyard. Demand for vessels in this size category indicates the potential for follow-on vessels.

SGTM Director Michel Labourdere said, “Based on the performance of Ntringui Express (Austal Hull 58), which was originally delivered to Japan in 1997 and bought by us in 2013, we knew we had to talk to Austal about our first new build,”

The Passenger Express 41 catamaran features a length overall (LOA) of 41.2 meters, beam of 10.9 meters and draft of 2.0 meters. Over two decks, the vessel can accommodate 400 passengers and mixed cargo of up to 20 tonnes, loaded via two ramps. To be fitted with Austal’s Motion Control System (including active interceptors and T-foils), 4x MTU 12V2000 M72 engines and 4x Kamewa 56A3 waterjets, the new catamaran is said to achieve 31.5 knots at 100% Maximum Continuous Rating (MCR), with a range of approximately 370 nautical miles.