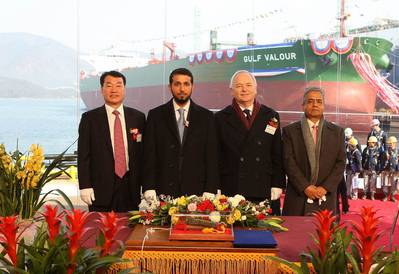 Gulf Energy Maritime (GEM) continues to expand its fleet, with the delivery of Gulf Valour, its second Aframax vessel. After two months since the delivery of Gulf Vision, its first Aframax vessel, GEM received Gulf Valour, which was also built by Samsung Heavy Industries. Standard Chartered arranged a Korean Export Credit Agency (ECA) to back the vessel’s financing.
The delivery of GEM’s second Aframax vessel reflects GEM’s leadership of responding to the market’s requirement as the industry gradually improves from the impact of the global financial crisis.
“Prior to the delivery of Gulf Vision, we have been cautious but optimistic on the tanker market. As such, we have constantly maintained our product development and offering as we aim to be a step ahead once the market stabilises and recovers,” said Ahmed Al Falahi, CEO of GEM. “It is indeed another milestone for GEM to receive Gulf Valour as we remain steadfast with our commitment of excellence across oceans and responsiveness to the needs of our customers and the market.”
Other VIPs and dignitaries present at the ship delivery event were Captain Robert Ferguson, GEM’s Head of MSEQ; Ovijit Roy, GEM’s Head of Fleet; and Krunal Bhatt - Director Origination & Client Coverage of Standard Chartered Bank.
Gulf Valour, like Gulf Vision, is equipped with state-of-the-art equipment that meets all international environment safety requirements with a capacity of 114,700 DWT capable of carrying both clean petroleum products and dirty products.
Gulf Valour joins GEM’s existing fleet which is currently composed of one Aframax, nine modern Panamax tankers, six MR tankers, and three Handysize tankers.
GEM is certified by Lloyd's Register Quality Assurance to the ISO 9001-2000 Quality Management System and ISO 14001-2004 Environment Management System for the operational and technical management of its fleet.
• Standard Chartered • Samsung Heavy Industries • Standard Chartered Bank