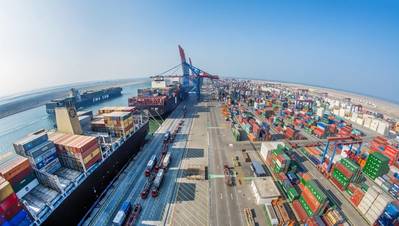 Until just over a year ago, the terminal faced unnecessary costs for moving and repositioning reefer containers with damaged panels or defects that hadn’t been recorded, said a press release from the APM Terminals, which holds majority stake in SCCT.

Since it opened its reefer container inspection and repair hub for Maersk containers around a year ago, the terminal has inspected close to 30,000 reefers. The terminal now plans to offer the same service across all brands.

This expansion will bring a number of benefits to the terminal’s customers. "Previously SCCT hired in a third-party to inspect and repair non-sound reefers. This brought added complexity and delays, particularly as the terminal had the internal capability to carry out the task much more efficiently," explains Inci Bicen, East Mediterranean (EMED) Equipment Maintenance and Repair (EMR) manager for Maersk.

All technicians at the terminal have undergone training to inspect, wash and repair reefer container to Maersk standards. SCCT has its own Engineering Training Lab, which combines theoretical knowledge with practical experience in equipment automation and technology.

Training is currently being extended to ensure that it meets the criteria for other major shipping lines. Systems within the terminal have also been updated to accommodate new workflows and spare parts suppliers have been sourced.

As well as plans to cater for other shipping lines – the majority don’t have their own inspection and repair process – the SCCT reefer repair hub is also expanding within Egypt. "We are making Egypt a competitor in the local market by bringing what we have done in SCCT to the surrounding area. The terminal is in a free zone, which provides a competitive advantage when purchasing spare parts,” explains Bicen.