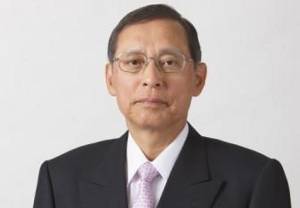 A Happy New Year to all in our MOL Group companies.

There is a Japanese saying, “ichiyo-raifuku” (the return of spring), meaning that “the winter has left and the spring has come”. It also means that “after a series of unfortunate things happened, things finally turning for the better”. I would like to celebrate the beginning of a new year together with all of you by rewording slightly this saying for MOL to “ichiyo-KENfuku”, which alters the meaning to: “do not wait passively for favourable turn of situations, but rather be proactive to seize better opportunities through our own endeavours”. This leads me to another phrase I have used from time to time: “change from a good surfer to a good swimmer”. Until the outbreak of the financial crisis in 2008, we enjoyed big profits by riding the crest of a wave in an extremely favourable market. But the situation today has radically altered, and now we must push hard through the rough seas of a severe recession by our own endeavours. I have great confidence that our employees, especially in the young generation, will take the initiative and use this severe business climate as an opportunity to build up their strength to swim through these tough economic waters.

Reaching enough cruising speed for effective steering
Looking back at our business performance in calendar year 2009, we can see that our results returned to the black in the third quarter (July to September, 2009), after hitting a low of \14.8 billion ordinary loss in the first quarter (January to March, 2009). While our current forecast for fiscal year (FY) 2009 ending March 2010 is \10 billion in ordinary income, I must say such profit level is insufficiently lower than it should be. Using the analogy of ship speeds to describe our business performance over recent years, in FY2007, when we recorded \302.2 billion in ordinary income, our company was moving forward like a 30-knot very high-speed vessel. In FY2008, when our ordinary income was \204.5 billion, we sailed at the speed of 20 knots, like a containership. However, the projected ordinary income for this fiscal year having tumbled to \10 billion means just 1 knot, which is slower than walking pace. Such a slow vessel cannot be properly steered without the assistance of tugboats. Although the world economy has been showing signs of a recovery, we still have a long way to go and the rough seas may easily become more turbulent. Therefore, we need to ride out any wild waves by steering the company in the most effective and safe manner possible. I would like to see us recovering to a cruising speed of 10 knots with top priority, which equates to around \100 billion in ordinary income, to manage our MOL group safely.

We have already taken a number of steps last year to return to such a cruising speed. Although our original plan was to increase the size of our fleet by 140 ships during 18 months after the financial crisis, mainly through new-buildings, we responded promptly to the decline in seaborne trade after the outbreak of financial crisis by embarking on “mission Sakaro” (a Sakaro is a scull which can move backward). This involved the scrapping of vessels and redelivery of chartered tonnage, and decreased our fleet by about 150 vessels to less than 900 vessels, which is the same fleet scale as before the crisis. Looking to the future, about 150 new-building vessels will be delivered over the coming three years, and our course has once again set to growth. I am fully confident that through our own efforts we will continue picking up speed until we reach our initial target of 10 knots and a solid business performance, and thereafter continue to 15 knots and beyond, driven by our reinforced strength.
(*) Sakaro: Military commander Kajiwara no Kagetoki advised building double-ended ships that could sail both forward and backward, when Minamoto no Yoshitsune was planning to invade Yashima in the Gempei War between the Minamoto and the Taira clans during the Heian Era (784-1184).

Containership business: Protecting itself like a “rai-cho” (snow grouse) while preparing to fly again
It is said that the “rai-cho” (snow grouse in Japanese), which lives on high mountains, refrains from flying and digs a hole in the snow to stay inside during winter. It traps air in its feathers to maintain its body temperature and saves its physical strength for the spring. In the containership business, which has taken a direct hit from the recession and posted big losses, we have reduced transport capacity by scrapping, redelivery, laying-up, slow steaming and so on, and have trimmed our organizational structure in response to declining worldwide container trade volume, resulting in cost savings of about \46 billion. Like the “rai-cho” tucked into their snow holes during winter, through these countermeasures to narrow down the supply to meet reduced demand, we protect and shelter ourselves during the harsh business climate to seize favourable opportunities by ourselves once circumstance picks up. While the measures we have already taken will continue to reduce losses in the containership business significantly, unfortunately the very difficult environment of the container business is forecast to continue for another three or four years. Under these circumstances, we must be firm in our resolve to avoid the large losses we saw in FY2009 and strive to maintain at least some level of profitability. Despite what appears to be a dire situation facing the containership business, I am confident that we will overcome whatever hurdles may come our way, especially in view of the forward-looking and determined responses by all the management staff of the MOL Liner to my personal address made at the end of the last year.

Growing with the world economy
A borderless global market is the arena of the ocean shipping business, where we can find a lot of opportunities for our growth worldwide. Japan’s economy has become stagnant in the face of deflation and it is difficult to expect significant future growth considering the nation’s matured demographic pattern. In the world economy outside of Japan, on the other hand, the U.S. and Europe are already heading towards a recovery, and the continued strong growth of developing countries such as China, India, and Brazil will almost certainly see further expansion of seaborne trade volume, making them more important players in the arena. For our future growth, MOL must shape its business activities to take maximum advantage of the opportunities presented by the world economic growth. While there are a number of obstacles that the ocean shipping industry needs to deal with to clear the way for steady growth, such as the redundancy of containerships in the industry, the reduction of greenhouse gas emissions, and so on, the ocean shipping is inherently a growing industry.

As a company, we have already taken steps to address the environmental issue and have pushed forward with the development of a series of next-generation vessels to reduce our environmental burden. We have already announced the concepts of ISHIN-I (car carrier) and ISHIN-II (car ferry), that aim to reduce CO2 emissions by 50%. These concepts are not some nebulous idea about “ships of the future”, but are soundly based on advancing and refining existing technologies and are eminently feasible, and we are presenting these eco-ships based on a realistic vision. I believe that by challenging the status quo and exploring new possibilities in growing fields, we can also drive the expansion of our company.

Aiming to be the world leader in safety
We have not suffered serious marine incidents since we took sincere efforts to learn from the accidents of 2006 and called on all employees to go back to the basics, “Safety First”. Zero accidents must be the main premise for the operation of an ocean shipping business – that is “to transport passengers and cargo safely”. I would like to express my great appreciation for the ceaseless efforts of all colleagues both onboard and onshore who have worked and continue to work in ensuring safe operation. Our company will only deserve to be regarded as a world-leading shipping group after it has been recognized as the world leader in safe operation. Please always remember the absolute aim for all of us to prevent accidents occurring, and continue to keep in mind operational safety as you go about your daily work activities.

2010 - the year of tiger, the year of MOL
Last year, we restructured our ferry business in Japan, with moves such as making Kansai Kisen Kaisha a wholly owned subsidiary, in order to better face the severe business environment. Regarding the cruise ship business, a refurbished Nippon Maru will commence a new voyage this coming spring. In addition, Nissan Motor Car Carrier Co., Ltd. became a subsidiary last year, and will strengthen our car carrier business as a new MOL Group member. These have been part of the establishment of a new framework to enhance and make progress in a range of business fields with which the MOL group companies are involved.

MOL’s Head Office is located in Toranomon in Tokyo, which in English means “gate of the tiger (of the Imperial Palace)”. As 2010 is the year of tiger (according to the Chinese zodiac), I feel these are auspicious signs and I am taking it upon myself to declare 2010 as “the year of MOL”, when and where MOL roar like a tiger and push fearlessly through the challenges presented by a severe recession, forging ahead to a better future. A new mid-term management plan will start this April. I know that all members of the MOL group are engaged in drawing up the details of the plan, so we would like to set a new course for the MOL group by incorporating the thoughts and ideas of this New Year message into the fabric of the new plan.

Finally, I pray for the safe operation of all MOL Group vessels in 2010, and I wish all of you and your families a very healthy and prosperous coming year.