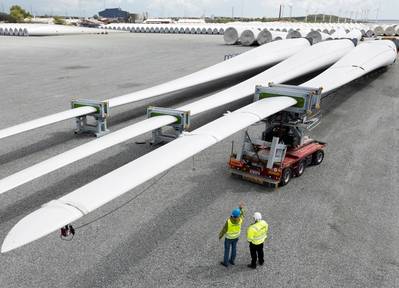 U.K. port bosses are scratching their heads as to how to meet demand as offshore wind, including new floating projects, ramps up around the country’s coastline.

The U.K. government is pushing this source of energy and has a 40-gigawatt (GW) by 2030 target—ramping up from around 30 GW today—for offshore wind. While fixed bottom projects continue to roll out, through some of the world’s largest offshore wind farms, a pipeline of 15 GW of floating offshore wind is also on the cards, thanks to the recent ScotWind round, with other projects also being planned in the Celtic Sea.

But simply having the space to store components such as blades is becoming a challenge for ports, even before the foundation structures involved in the expected future ramp up in floating offshore wind come into play, RenewableUK’s Port & Vessels conference in Hull, on England’s east coast heard on Thursday.

Andy Reay is Group Head of Commercial (Offshore Wind) at ABP (Associated British Ports), which has a network of 21 ports around the U.K. He told the event, “There are three core elements to the floating offshore wind value chain. The most demand in terms of infrastructure is the large floating foundations and the turbine integration [operations] associated with it. That element, in my mind, the U.K. doesn’t have enough capacity to deliver. Those gigawatt projects in ScotWind and the Celtic Sea, we just don’t have enough infrastructure to deliver. It is the elephant in the room.” However, he said, “It will come. ABP has plans to deliver infrastructure.”

“It's not about quay loading,” he said. “If you look at delivering 50 (floating turbines) a year, there’s not a huge amount of hinterland and storage area and circulating space [currently]. These structures are so large just moving them around is so space intensive, so whatever you do, you have to be mindful of the future and how it will grow.”

Steve Chisholm, Director of Operations and Innovation, Global Energy Group, which has quayside construction facilities in Scotland, agreed. He said, “The sheer land mass required is enormous. No sooner than we have finished one expansion than we are on to the next. No matter what you do it never seems enough.”

Andrew Elmes, Head of Business Development, U.K. and Ireland, at Siemens Gamesa, said in the five years since it was set up, their facility with ABP at Hull Green Port has seen 1,600 turbine blades shipped out and more than 500 turbines assembled and loaded out on to installation vessels. But now the site’s capacity is being stretched to the limit.

“Moving, storing and lifting is becoming a bigger and bigger challenge,” he said. The next round, AR4, will have 14-megawatt (MW) turbines that the port is going to have to handle and that’s just for fixed wind, he said. “I can’t emphasize enough that we don’t have the space, strength and depth and hinterland for the fixed projects, never mind the floating projects coming. I think there’s a serious challenge in the U.K. in the short term.”

Other challenges are around the diverse range of foundation designs in floating offshore wind, including different assembly techniques. To extent, foundation designs are being adapted to suit capabilities of different ports, but that’s a compromise, Reay said, adding that ports should be flexible enough to accommodate different designs. Then there’s also challenges around crane capacity, especially for floating, where it’s expected assembly will be at the quayside, with complete turbines then towed out to site, as components keep getting bigger and bigger.

Chisholm and others called for collaboration. Although it was also accepted that this is a very competitive industry and collaboration will only go so far.

“Scotland is well ahead,” he said, “with the 15 GW of projects announced. Scotland has had oil and gas for 40 years, so the supply chain and infrastructure is fairly well developed. But even then, there’s a huge development required for those developments to be serviced. In the Celtic Sea, 4 GW by 2035 is being targeted. There is some (local) capacity, facilities and land potential.”

But he says while 4 GW by 2035 is a great start, “if you look at the investment needed, 4 GW is not enough to unlock the private element of that (investment) and you don’t have other activity in parallel i.e. fixed bottom offshore wind, so this investment is more sensitive to floating projects. In northeast England, there’s a big challenge. There’s no floating offshore wind leasing round in play. In theory, there are some nice floating projects, but no leasing round, so these regions are in quite different positions.”