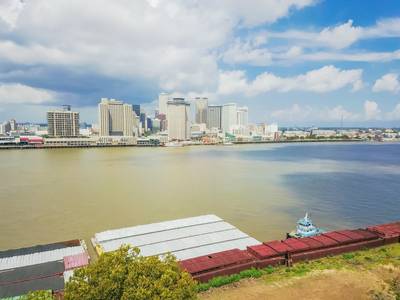 “This Federal assistance will provide additional options to reduce congestion on the roads and help the surrounding local communities’ and the regions’ economic recovery,” said Transportation Secretary Elaine L. Chao.

The America’s Marine Highway Program promotes the increased use of the Nation’s navigable waterways to ensure landside congestion relief, new and efficient transportation options, and increased performance of the surface transportation system. The program works with public and private stakeholders to achieve these goals.

Since 2016, the Maritime Administration has provided $33.8 million in grants for the America’s Marine Highway Program. A total of 18 eligible marine highway projects has received funding assistance to further improve the transportation system and national security by adding to the nation’s strategic sealift resources and providing transportation alternatives during times of disaster or national emergency.

Illinois: M-35/M-55 Container on Barge Service (awarded $1,268,800) (Opportunity Zone)
Sponsored by America’s Central Port District, the grant will support the purchase of a 275-ton crane, eighteen cameras and their installation, and a Container Tilter. America’s Central Port District Container Handling and Securing Equipment Project will bring efficient container on barge movement to the St. Louis area on the M-55. In addition to increasing container-on barge movement, this award will revitalize some of these areas and recreate the strong heritage of river transportation.

Indiana: M-70 Barge Service in the Ports of Cincinnati, Northern Kentucky and Beyond (awarded $545,136) (Opportunity Zone)
Sponsored by Ports of Indiana, the grant will establish a new storage facility and support expansion of its existing Marine Highway service between Nucor Gallatin in Ghent, Ky. and the Port of Indiana-Jeffersonville. Components include the construction of an outdoor laydown area and the purchase of a forklift. This award will create supply chain efficiencies for Nucor and the private sector partners as well as generate public benefits by taking over 2,000 trucks off the highways and eliminating more than 130,000 miles in one-way truck hauls per year.

Kentucky: M-70 Barge Service in the Ports of Cincinnati, Northern Kentucky and Beyond (awarded $2,363,800) (Opportunity Zone)
Sponsored by OKI (Ohio-Kentucky-Indiana Regional Council of Governments), Nucor Steel Brandenburg was awarded the grant to support the construction of a marine terminal and consists of two re-purposed casino barges. By moving cargo via barge on the Ohio River, the marine terminal is expected to employ approximately 20 people with full-time jobs in the material handling and stevedoring functions as well as related jobs for fleet boat operators and deckhands. In addition, this award will help stimulate the U.S. shipbuilding industry on America’s inland waterways.

Louisiana, Tennessee: Baton Rouge-New Orleans Shuttle of the M-55 (awarded $778,350)
Sponsored by the Port of New Orleans, SEACOR AMH was awarded the grant to provide permanent dunnage fabrication and installation in 29 of its existing pool of barges. Permanent dunnage fabrication will increase utilization of the barges. The award will support the continued growth of the Memphis, Tenn., to Port Allen, La., container shuttle service and allow the movement of 10% more containers per barge.

New York, New Jersey: M-95 New York Harbor Container and Trailer-on-Barge Service (awarded $308,000) (Opportunity Zone)
Sponsored by the New York City Economic Development Corporation, the US Coastal Service Inc. was awarded the grant to support the launch of a new barge service between Kearny Point, N.J., and Newtown Creek, N.Y. The award will fund the planning, permitting, and engineering studies required to start operation. This service will establish New York Harbor and its ports as a premier marine highway hub for barge services while reducing traffic by eliminating up to 6,000 truck-miles per week.

Oregon, Washington: Port of Morrow M-84 Barge Service Expansion (awarded $3,200,000) (Opportunity Zone)
Sponsored by the Port of Morrow, Tidewater Barge Lines, Inc. was awarded the grant to support the expansion of barge services from the Port of Morrow in Boardman, Ore., to Vancouver, Wash. The expansion will include the procurement of a new barge capable of handling a combination of containers that will ultimately alleviate area traffic by diverting freight to the underutilized M-84 corridor.

American Samoa: Port and Landside Infrastructure Improvements/Port of Pago Pago American Samoa (awarded $943,000) (Opportunity Zone)
Sponsored by the Port of Pago Pago American Samoa, the grant will be used to purchase a yard floodlighting system, rehabilitate the dock fendering system, resurface the container yard, and procure forklifts. Funding this project will increase the port’s ability to be more flexible with its operations area, resulting in an increase in the overall productivity of port facilities.