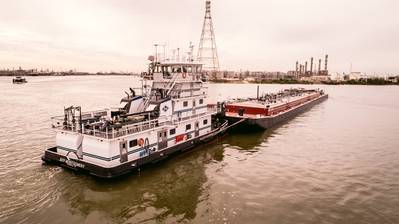 A file image of a typical Kirby pushboat and barge. CREDIT: Kirby Corporation

The Houston Ship Channel could remain under one-way travel restrictions all week following a collision between a deep-draft ship and a barge that spilled petrochemicals into the waterway, according to an official.

About 9,000 barrels of gasoline spilled into the channel near Bayport, Texas, when a 755-foot (230-m) tanker collided with a Kirby Inland Marine tugboat towing two barges containing the fuel. One barge ruptured and the other capsized.

The U.S. Coast Guard limited travel to one-way traffic because barges blocked part of the channel. The 53-mile (85-km) waterway connects Houston to the Gulf of Mexico and is home to nine oil refineries that process 12% of the national total.

No injuries were reported from the collision. The efforts to offload fuel from the barges and remove them from the channel could extend into the weekend, said J.J. Plunkett, port agent for the Houston Pilots, which guides ships through the channel.

The damaged barges are in a heavily trafficked area of the channel, Plunkett said. "Everyone is affected."

Officials expect to finish siphoning fuel from the first barge by Tuesday and then begin emptying the capsized, second barge. Emergency workers must cut through the hull of the second barge to offload its fuel.

Bayport Channel Collision Response, the group set up to oversee the emergency response and clean up efforts, declined to say how long it expects the removal to take, said spokesman Greg Beuerman.

It was the second time in five years that a Kirby Corp-operated tugboat and barges under tow collided with a larger ship in the Houston Ship Channel.

In 2014, two Kirby-towed barges crossed in front of a container ship and the resulting collision spilled 4,000 barrels of marine fuel into the channel. The likely cause of that accident was the towboat captain's decision to cross the channel ahead of the container ship, NTSB said in a 2015 report.

U.S. Coast Guard and National Transportation Safety Board (NTSB) officials have begun an investigation of the collision.

Kirby Corp declined to comment on the cause of the weekend incident. The company is cooperating with investigations by the U.S. Coast Guard and NTSB, said spokesman Matt Woodruff.

In its 2016 settlement with the Justice Department, Kirby agreed to install and train personnel on enhanced navigational software aboard its vessels, and provide simulator training on scenarios similar to the 2014 incident, Woodruff said.

"All of that has been done," he said.

Forty-five ships exited the channel on Sunday and there were 53 vessels waiting at 2 p.m. on Monday to enter the 53-mile (85 km) waterway connecting the refining hubs of Houston and Texas City, Texas, to the Gulf of Mexico, Bayport Channel Collision Response said. On average, 55 to 65 ships will be piloted through the channel each day.