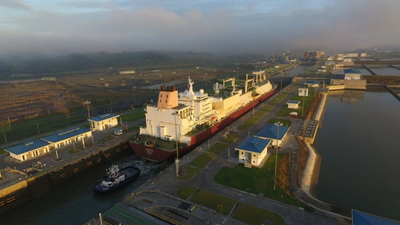 The tanker–which measures 315 meters in length and 50 meters in beam with an overall cargo capacity of 210,000 cu. m. of LNG, transited northbound from the Pacific to the Atlantic Ocean.

Q-Flex LNG tankers can now pass through the Panama Canal following an increase in the maximum allowable beam for vessels transiting the Neopanamax locks. Implemented in June 2018, the maximum beam allowed is 51.25 meters, up from 49 meters, as measured at the outer surface of a vessel's shell plate and all protruding structures below the lock walls. Such an increase was made possible as a result of the efficiencies gained by the Panama Canal's continued investment into its operations and resources, and due to the ongoing excellence and experience of its employees.