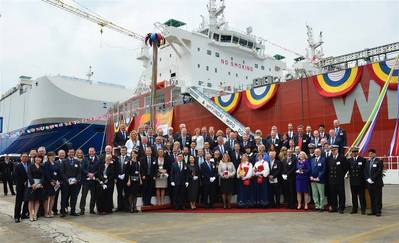 The ship is the first of two dual-fueled 50,000 dwt tankers owned by Norwegian firm Westfal-Larsen that will be chartered to global marine transportation company Waterfront Shipping.

With a MAN designed Hyundai–B&W 6G50ME-9.3 ME-LGI dual-fuel, two-stroke engine on board, the Lindanger can run on methanol, fuel oil, marine diesel oil or gasoil. The Lindanger has been assigned the additional notation LFL FUELLED to demonstrate her compliance with the DNV GL rules for low flash point marine fuels. DNV GL was the first classification society to publish rules covering LFL fuels in July 2013, to ensure that the arrangement and installation of these systems have an equivalent level of integrity in terms of safety and availability as a conventional system.

“We are very pleased to see the completion and launch of this exciting and innovative newbuilding,” said Knut Ørbeck-Nilssen, CEO at DNV GL – Maritime. “This is the first time a dual-fuel engine with a Low Flashpoint Liquid (LFL) fuel system has been installed on an ocean-going vessel and it is a testament to the excellent cooperation between all the project partners that we have been able to complete this unique project and gain flag state approval. Methanol as a marine fuel is a very promising option to enable owners to reduce the environmental impact of their vessels and to comply with low sulphur and ECA regulations and we look forward to working on many more projects using this innovative marine fuel and technology.”

Jone Hognestad, President, Waterfront Shipping, added, “It is exciting to be working with our partners to advance this new, clean technology. Investing in methanol-based marine fuel is an important step in the right direction and reinforces our commitment to sustainable proven technology that provides environmental benefits and meets emissions regulations.”

“We are so privileged to become the first shipyard in the world to deliver a methanol fueled vessel,” said Man Choon Kim, Vice President, Contract Management Department, Hyundai Mipo Dockyard Co., Ltd. “It will reduce SOx emissions by about 95 percent and NOx emissions by about 30 percent compared to conventional marine diesel oil. Methanol could become one of the popular alternative marine fuels in the future as an environment friendly solution with lower fuel costs, easier handling with the existing storage and bunkering infrastructure and lower installation and retrofit costs.”

The Lindanger is the first in a series of seven vessels which will be chartered by Waterfront Shipping over the course of 2016. Four of the seven vessels are being constructed to DNV GL class, including two vessels owned by Westfal-Larsen, the Lindanger and a sister ship, and two owned by a joint venture between Marinvest/Skagerack Invest and Waterfront Shipping. A further three ships, where DNV GL carried out a hazard identification study, will be owned by Mitsui OSK Lines (MOL). Waterfront is a wholly-owned subsidiary of Methanex Corp, the world’s largest producer and supplier of methanol, and operates a fleet of 22 deep sea tankers of between 3,000 dwt and 50,000 dwt, which are used for transporting methanol worldwide.

Methanol is a safe, cost-effective, clean-burning fuel of today and the future, according to DNV GL. Of growing interest in the shipping world, methanol is sulphur free (SOx) and with lower particulate and nitrogen oxide emissions. It is a promising option for vessels which are operating in ECAs (emission control areas) and for meeting both current and future regulations covering SOx emissions. Methanol is produced from natural gas and can also be produced through renewable sources, such as biomass, recycled CO2, agricultural and timber waste. The energy content of methanol is roughly half that of standard heavy fuel oil, but as it is a liquid, methanol can be handled by conventional bunkering and storage solutions without extensive modifications. The cost to build new and covert existing vessels to run on methanol is significantly less than alternative fuel conversions. Also, as one of the top five chemical commodities shipped around the world each year, methanol is available around the world through existing global infrastructure.