Ferry Crew Fatigue the Cause of Hong Kong Accident 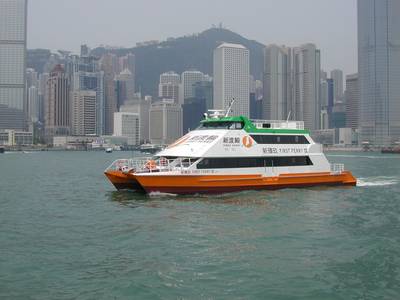 A Hong Kong Marine Department (MARDEP) enquiry into damage & passenger injuries caused when a local fast ferry hit the anchor cable of a vessel, found that 5 crew members were making their 15th voyage.of the day. The MARDEP report reads as follows:

"While the ferry was sailing at a speed of 22.5 knots at the Western Fairway, the coxswain and the assistant coxswain claimed to see a white light of a fishing boat crossing ahead of the ferry from port to starboard. The coxswain then steered the ferry to port for about 30 seconds to avoid collision with the fishing boat. This maneuver was however not in compliance with the Collision Regulations.

The investigation revealed that the ferry had never returned to its planned route after taking such maneuver, and had maintained off-course by about 105 degrees. It was noted from the CCTV record that both the coxswain and assistant coxswain appeared to be fatigued and did not take proper look-out over this entire period. As a result, the ferry went into the North Lamma Anchorage and hit the anchor chain of a vessel at anchor with a speed of about 20 knots. The collision caused injuries to 11 passengers onboard the ferry.

The fatigue and inappropriate action of the coxswain and the assistant coxswain of the ferry were the contributing factors to the accident:
a) a proper look-out had not been maintained and the positions of the ferry were not checked regularly; and
b) fatigue appeared to have set-in on both the coxswain and the assistant coxswain probably due to their long working hours causing them to fall into a state of drowsiness momentarily.

To avoid recurrence of similar accidents, owners and operators of all local vessels, particularly those adopting the operation mode that requires long duty hours of the masters/coxswains, are reminded to ensure that the duty rosters of masters/coxswains should be provided with sufficient rest periods during operation to avoid fatigue."