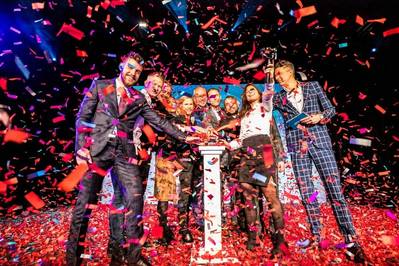 The launch of Europort 2019 at the Rotterdam Ahoy yesterday (November 05) saw well-known journalist Geert Maarse bring four of the leading owners in Europe’s special ship segments to grips with the key challenges facing the maritime industries today and tomorrow.

Now in its 39th edition, Europort continues to hold its own as one of the most significant events in the maritime calendar, with registered visitors this year reaching 27,000. In 2020, a new convention center will open alongside the existing site, expanding overall space by 50%.

Europort’s emphasis of smart business, smart people and smart technology as central to shipping was mirrored by ESL’s use of the autonomous bulk handling cranes, a first Van Oord onshore support center to enable autonomous sailing and Stena’s use of AI-based pilot technology. However, early exchanges at today’s summit focused on the profit motive.

Antonio Bordils, CEO of Boluda Towage, said some ‘smart’ solutions did not need deep thinking: tug efficiency would improve remarkably if more European ports invested in electric power points. Van Oord CEO Pieter van Oord said it was often difficult today to foresee how viable investments made now would be at the end of a ship’s 25-year lifespan.

Meanwhile, Europe’s position as a center for marine equipment innovation deserved support but was under threat. According to Annika Hult, Managing Director of Stena Line BV: “There is an amazing amount of knowledge in Europe. Yes, we are building ships in China, but we are using European subcontractors and European knowledge.” In contrast, Pieter van Oord called for a leveling of the playing field between Europe and China. “If China is supporting their industry and Europe is not then we are losing it,” he said.

A clear mood shift blew through the Ahoy auditorium as Roosegarde took the platform. The Rotterdam-based futurist, who finds the connections between people, technology and design, outlined how radical technologies could be realized that served economic and environmental ends.

The pioneering but practical projects included an air filtering ‘smog-free tower’ for urban areas, ‘Windvogel’ kite energy and a ‘space waste lab’ to recover space junk. All of them either sought to convert existing problems into resources or simply to recover otherwise wasted resources.

“I don’t believe in Utopia anymore,” said Roosegarde. “I believe in Protopia. Prototype, testing, learning, step by step. We don’t know how the future will look but we know other things: we can’t go back and holding on to what we know is not future proof. We have to invest in new ideas to survive.”

Responding to the change of pitch, Hult commented: “The maritime industry tends to be a little bit traditional. How good are we really at keeping an open mind? How do we utilize the potential in our organisations? Are we capitalizing all the different people we have? Are we leading? I don’t think we are. As a sector we need to look much more at disruptive technologies to make ourselves more competitive.”

Also center stage during the launch ceremony were three Young Maritime Representatives taking part in the ‘High Tech, Hands On’ initiative sponsored through Maritime by Holland initiative to sponsor. Students Danique Horstmeier (Delft), Bas Peeters (STC Rotterdam) and Jesper Poppe (Vlissingen), who were given the opportunity to express their aspirations, also joined the four owners, Roosegarde, Maarse and Ahoy Managing Director Jolanda Jansen to ‘press the button’ on the official launch.