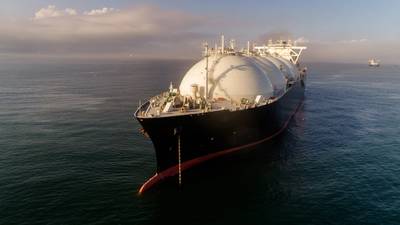 China set a 10 percent tariff on U.S. liquefied natural gas (LNG) imports, extending a trade dispute into energy and casting a shadow over U.S. export terminals that would propel the United States into the world's second-largest LNG seller.

Beijing on Tuesday said it would tax U.S. products worth $60 billion effective Sept. 24 in retaliation for tariffs imposed by U.S. President Donald Trump in an escalating trade war.

The rate was smaller than the 25 percent tariff China had touted earlier, which offered some relief and helped shares in listed U.S. LNG companies climb.

The tariffs undermine Trump's drive to use U.S. shale oil and natural gas to turn the United States into a global energy leader. The U.S. is on track to export over 1,000 billion cubic feet (bcf) of gas as LNG in 2018. One billion cubic feet is enough to fuel about 5 million U.S. homes for a day.

But China, which purchased about 15 percent of all U.S. LNG shipped in 2017, is now on track to buy less than 100 bcf of U.S. LNG in 2018, less than last year, according to Thomson Reuters vessel tracking and U.S. Department of Energy data.

The country has taken delivery from just four vessels since June versus 17 during the first five months of the year.

Proposed U.S. export terminals, many expected to supply Chinese customers, were expected to account for 60 percent of all new LNG production coming to market by 2023, according to industry data.

LNG, which involves super-cooling natural gas so it can be transported by ship rather than pipeline, has become one of the fastest growing commodity trades as nations seek cleaner fuels.

The tariff's extension to an energy commodity much in demand in China was a worrisome sign for trade relations and for billions of dollars in proposed U.S. terminals, said trade group executives.

Including LNG "is a good indicator of how serious things have gotten between the U.S. and China on this trade issue," said Charlie Riedl, executive director of Center for Liquefied Natural Gas, a group whose members include Cheniere Energy, Chevron and Exxon Mobil.

"While we would like to see this resolved quickly, I don't see that happening right now," said Riedl, speaking by phone from a natural gas conference in Spain. The longer the dispute lasts, the less likely proposed projects will find financial backers, he said.

Analysts say the tariffs will particularly hit plans by U.S. companies, such as Cheniere Energy, Sempra and Kinder Morgan, to build new terminals or expand existing ones by adding processing units.

"Some commercial agreements may be on hold until there is more visibility," said Stacey Morris, director of energy research at Alerian Indexes.

But the smaller-than-expected Chinese tariff helped lift Cheniere Energy, whose shares on Tuesday were up 2.9 percent, and Golar LNG, whose stock rose 2 percent.

China imported 1.6 million tonnes, or 11 percent, of the 14.9 million tonnes of LNG exported from the United States so far this year, according to Thomson Reuters data. That accounted for 5 percent of total Chinese LNG imports.

The U.S. has been looking to Europe to take on more of its natural gas as the China dispute continues. Germany said on Tuesday the country would decide by year-end where to locate a new LNG receiving terminal as a gesture to the Trump administration.