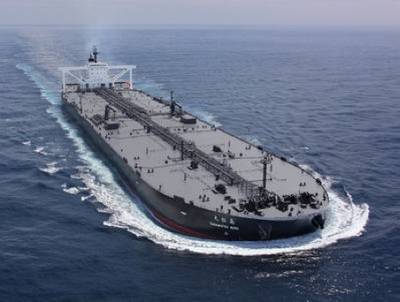 The 158,000 dwt tankship was chartered by TonenGeneral Sekiyu K.K. from NYK Lines, after the company purchased virtually all of Exxon Mobil Corporation’s Japan business.

The vessel was built by IHI Marine United Inc. and delivered in June, 2012.

TonenGeneral Sekiyu has also assumed the charters of two additional VLCCs — Taiga and Tamba — bringing to three the number of vessels currently chartered by the company from NYK.

While the 'Takamatsu Maru' was at the sea berth of the Kawasaki refinery, interested parties visited the ship with P.P. Ducom, chairman of TonenGeneral Sekiyu, and Tomohide Miyata, managing director of TonenGeneral Sekiyu. In commemoration of the ship’s first arrival, a memorial plaque was presented to the ship’s captain by Mr. Miyata. Afterward, Chairman Ducom voiced his desire for stable transport, and the party then toured the vessel with NYK corporate officer Kenichi Miki.