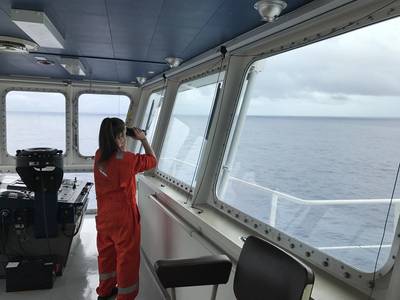 “Coming from a small town, my cadetship allowed me to go further and experience much more than I ever imagined I could.”

Rachel Vassallo, 23, from South Shields, is one of the 70 students who have received a Sailors’ Society scholarship since 2015 to help achieve a career at sea.

“I had only been on one ship before and that was the Shields Ferry,” she said.

“Learning about topics such as celestial navigation and ships stability was quite daunting but with training on firefighting, survival and first aid, it was an exciting start to my cadetship.”

Now a qualified Deck Officer of the Watch, she says the cadetship has provided her valuable skills and experience and enabled her to find a job with Princess Cruises.

Rachel joined her first ship, the STS Lord Nelson, in 2016.

The vessel is designed to be accessible to people of all abilities.

“I learned the basics of being an officer of the watch, and because of the age of the ship, a whole lot about ship maintenance.”

After travelling on board from the Canary Islands to Southampton, Rachel joined a couple of ferries.

“The Irish Sea was a valuable experience, I feel I learned the most about how to be an officer and was given a far greater amount of responsibility than I ever imagined I would as a cadet.

“I was trusted to load the main deck and lower holds, take charge of mooring stations and even manoeuvre the ship off the berth under the Captain’s supervision.”

She then joined a large cargo vessel with a multinational crew.

“I saw a great deal of the world, sailing to Brazil, America and Singapore.

“It was hard getting used to not having any passengers on board.”

Although she doesn’t speak any Tagalog, that didn’t hinder Rachel from engaging with her crewmates.

“The crew spent time honing their English skills and even managed to learn a few Geordie phrases.”

On returning to South Shields Marine School, she completed her exams and is now looking forward to a career at sea.

“My cadetship has been the best experience of my life and I would like to thank Sailors’ Society for their financial support and enabling me to start what I hope will be a long and rewarding career,” she said.