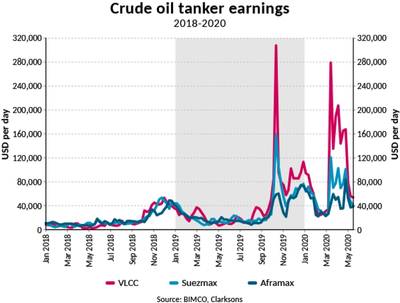 Geopolitical tensions have now eased, leaving freight rates to feel the full effects of the weak underlying market and falling demand. Tanker shipping looks set to be under pressure for the rest of the year.

The tanker shipping industry was once again caught in a whirlwind, as freight rates skyrocketed with little regard to the poor market fundamentals before the latter once again caught up with rates. Geopolitics continues to dominate the headlines when it comes to the tanker market, and developments in the supply of oil overshadow the steep drop in demand caused by the Covid-19 crisis. Floating storage has also increased primarily due to the mismatch between oil production and oil demand, tightening tonnage availability in the market and further supporting freight rates.

April was certainly a month to remember, with the biggest oil-producing nations setting off a price war and flooding the market with millions of extra barrels each day – at the same time as demand was collapsing.

The OPEC+ (an expanded alliance of countries collaborating to control the world production of crude oil) production cut that was eventually agreed, and has now come into force is, however, still not enough to balance the oil market after lockdown measures around the world cut demand for all oil products.

The chartering spree from Saudi Arabia, as it prepared to flood the market with its cheap oil in April, led average Very Large Crude Carrier (VLCC) earnings to soar to USD 279,259 per day on 13 March, with rates staying high until the end of April. However, since then, as oil production has been cut and the reality of an oversaturated market hit home, rates have dropped to USD 42,547 per day on 22 May. Rates will continue to fall, as the global economy is unable to provide the demand needed to keep them elevated.

Oil product tanker rates saw a more restrained rise in earnings in March and April compared with their crude oil counterparts. But the sudden and unsustainable demand for crude tankers eventually led to earnings also spiking in the clean market, with LR2 earnings reaching USD 167,158 per day on 1 May and LR1 earnings hitting USD 114,370 dollars per day. They have since fallen to respectively USD 32,999 and USD 28,293 per day (22 May). 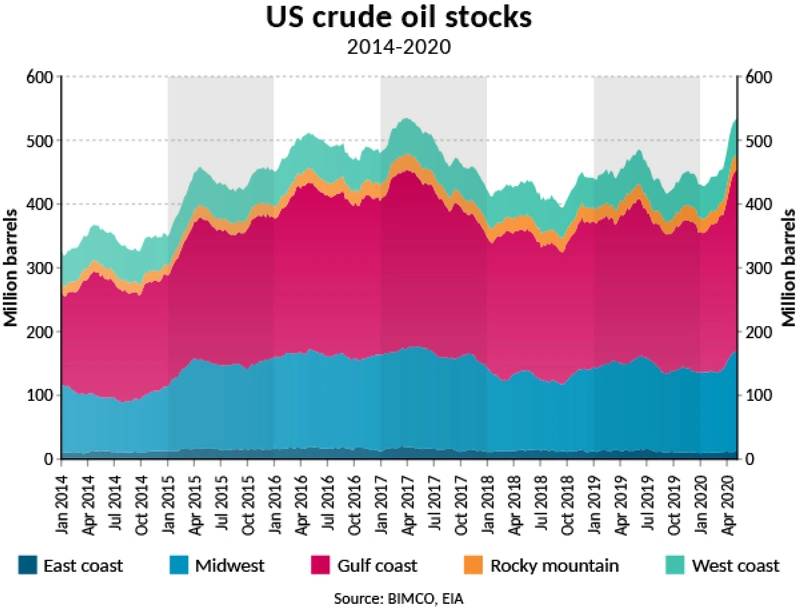 The dramatic increase in oil production in April, at the same time as demand collapsed, caused the oil price to tumble. The price of West Texas Intermediate (WTI) crude oil for delivery in May fell briefly into negative territory in late April as concerns over storage availability rattled the market – an unprecedented event. Following a sharp increase in storage since the end of March, US crude oil stocks have risen to their highest level since April 2017 at 532.2 million barrels at the start of May. Stocks in Cushing, Oklahoma, peaked at 65.5 million barrels on 1 May – around 86% of its working capacity and the highest level since May 2017.

The sudden drop in the price of crude oil because of higher supply and lower demand, left countries facing different prospects. Because of its low cost of production per barrel, Saudi Arabia is able to keep producing oil at a profitable rate, while other major producers with higher costs find themselves losing money at the current oil price (in April, Brent crude averaged USD 26.6 per barrel). The US Energy Information Administration (EIA) forecasts that, given the lower price, crude oil production in the US will fall by 4.1% in 2020 (to 11.7m bpd) from 2019 levels and decline a further 6.8% in 2021 (to 10.9 m bpd) from 2020 figures.

Increased production by Saudi Arabia is detrimental to US producers and is bad news for tanker shipping. Now the temporary jump in shipments out of Saudi Arabia has passed, demand for shipping will fall because of this trend, as the distance needed to be covered is much shorter. A trip to China from the Middle East is 5,800 nautical miles, whereas if the crude oil comes from the US Gulf, a ship must cover 15,000 nautical miles.
Crude oil imports to China for example were up 1.7% in the first four months of the year. Even though, under the “Phase One” of the US-China trade agreement, China has committed to increase its purchases of crude oil from the US, the imports from the US totalled only 0.4 million tonnes in Q1 – a 54% drop from Q1 2019. This means that, of the 39.2 million tonnes of crude the US exported in Q1 2020, only 1.1% has gone to China.
The realisation of the commitments made under the “Phase One” agreement become even more unacheivable when you consider the recent drop in the oil price. The extra volumes agreed upon for this year (+244%) and the next were based on 2017 export values, when the oil price was considerably higher. To match 2017 values, let alone exceed them by several billion dollars, exports by volume would have to rise by significantly more than the 244% growth needed in value. After the first quarter, exports of energy goods are down by 94% from Q1 2017. Read more about the trade war here.

Fleet news
Unsurprisingly, given the developments in the market, no tankers were demolished in April, with reductions in the total tanker fleet so far this year coming to only 0.6m DWT, down 63% from the same period last year. Of total tanker demolitions, 0.4m DWT were product tankers and the remaining 0.2m DWT crude oil tankers.

BIMCO expects the product tanker fleet to expand by 2.4% this year, with growth so far of 1.1%. The crude oil tanker fleet is expected to rise 2.1% this year. BIMCO’s expectations for demolition levels in the two markets remain unchanged from the previous update at 1m DWT and 7.5m DWT, respectively.

Product tankers were particularly popular among investors in April, with new orders for these totalling 1.8m DWT, including 12 for 120,000 DWT LR2s by Chinese leasing companies. 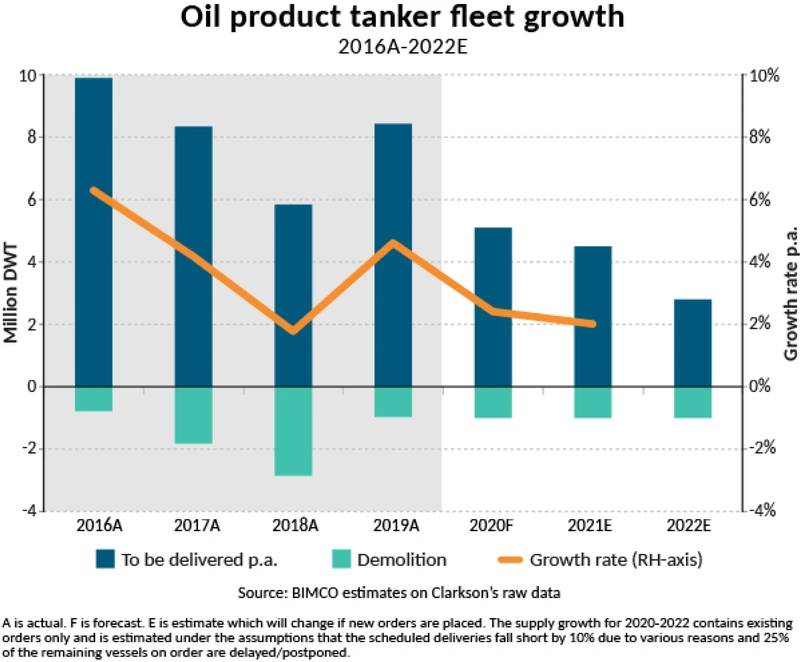 Outlook
The outlook for the tanker shipping market is highly dependent on how long lockdown measures and travel restrictions continue. However, even once restrictions are officially lifted, demand for transportation, which accounts for 55% of oil demand, will not rebound suddenly, as uncertainty will keep downward pressure on the market. Travel – and air travel in particular – will be slow to return. The direct impact of lower demand for transport will add to the decrease in demand for fuel caused by diminished economic activity. Similarly, the demand for plastics and petrochemicals (19% of oil demand) is heading for a slow recovery.

Tanker freight rates, once past the April spike, will fall to much lower levels and remain under pressure until global oil demand recovers. Given the economic outlook, this is likely to be a cumbersome and long-winded process.
In its May Oil Market Report, the EIA estimates that global oil demand will fall by 8.1 million bpd in 2020 from 2019 levels, with demand in the second quarter of this year expected to be 18.8m bpd lower than Q2 2019. The 7.0 million bpd increase currently expected in 2021 is not enough to return demand to 2019 levels. Because of the lockdown measures, as well as the poorer health of the economy and consumer spending ability, even the low fuel price is unlikely to lead to higher demand.

As a result of the dramatic drop in demand, refineries around the world have announced cuts to production in response to faltering demand. In the US, for example, refinery throughput has fallen by 24.5% since the start of the year, taking in 12.7m bpd of crude oil in the last week of April – the lowest levels since 2008, and 4.1m bpd lower than the start of this year.

Even while refineries across the globe are cutting production, some positive news can be found in China. After deep production cuts in February during its lockdown, Chinese refineries are now taking advantage of the low oil price and ramping up production; Bloomberg reports that the privately owned and independent teapot refineries have seen their crude throughput reach record high levels. However, the strength and duration of this recovery remains to be seen. Even though China is further ahead of the rest of the world as it exits its lockdown, fear of a second wave of infections and muted external demand dampens the outlook.

Floating storage has been one of the hot topics in the tanker shipping market recently, but remains clouded in uncertainty, particularly in respect of how much tanker capacity is currently being used for storage. What is clear however, is that floating storage has reached its peak and will start to wind down. As it does so, tonnage currently tied up in storage will re-enter the market and put further downward pressure on freight rates.
The main talking point going into the year – the IMO 2020 sulphur cap – has also been affected by the Covid-19 pandemic and subsequent drop in oil prices.

On 1 January, a metric tonne of high-sulphur fuel oil (HSFO) in Singapore cost USD 360 and a tonne of very low-sulphur fuel (VLSFO) USD 710, giving a spread of USD 350 per tonne, and offering a large advantage to scrubber-fitted ships. Since then, fuel prices have fallen, lowering costs for all, but also significantly increasing the payback period for a scrubber investment, as the HSFO-VLSFO spread has fallen to just USD 73 per tonne on 19 May.