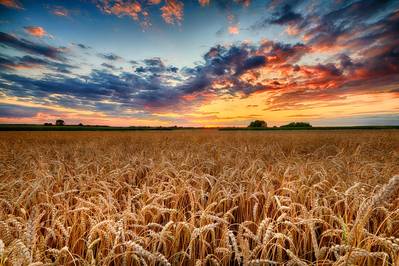 Record high US seaborne exports of coarse grains in March of 9.2 million tonnes took total Q1 exports to 21.3 million tonnes. This is the highest ever first quarter on record and a 120% increase from Q1 2020.

Of the total 21.3m tonnes exported so far this year, 68%, or 14.6m tonnes, have gone to Asia, an increase of 208.7% from Q1 2020. For years, the trade war has lowered US exports to China, but exports are now rebounding with a vengeance and China becoming the largest buyer of US coarse grains. Coarse grains include corn, grain sorghum, oats, barley and rye, with corn accounting for 89.4% of the total. Accumulated exports so far this year to China stand at 6.2m tonnes, an almost ten-fold increase from the just 650,950 tonnes exported in Q1 2020.

The two other large buyers of US coarse grains are also in Asia, namely Japan and South Korea. These have seen exports in the first quarter of this year rise to 4.3m tonnes (from 2.9m tonnes in Q1 2020) and 1.7m (from 0.6m tonnes) respectively. 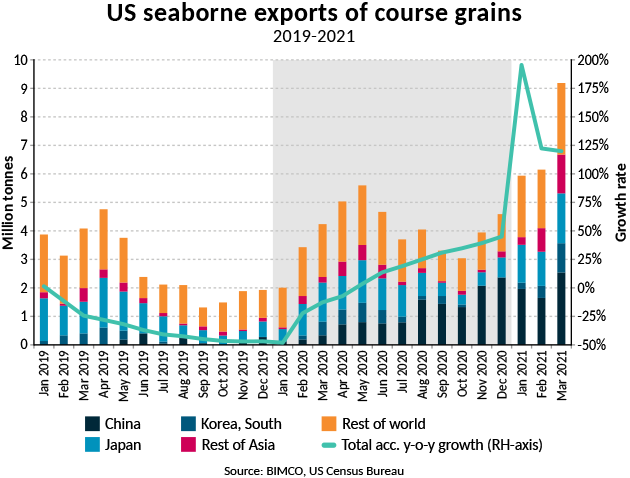 Though exports to the rest of the world, excluding Asia, are also up at the start of this year compared to 2020 (by 116.3%), exports to Asia have grown by an impressive 208.7% and the region is gaining market share. Because the average sailing distance from the US to Asia is much longer than to the rest of the world, tonne mile growth has been even more impressive than the growth in absolute volumes.

The vast majority of exports are transported in dry bulk ships, although a small share travels as containerised goods.

“The dry bulk market continues its strong performance this year, supported in part by strong demand from grains trade, with the US providing plenty of support. After a record high start to the soya bean export season, these have now fallen to their usual out of season levels of around
2m tonnes a month, but higher exports of coarse grains ensure steady demand from the US for grain carrying ships,” says Peter Sand, BIMCO’s Chief Shipping Analyst.

“In March alone, US coarse grain exports required 123 Panamax ships, almost two thirds of which sailed to the Far East, one of the world’s longest trades. At the peak of the US soya bean export seasons in October, 147 ships were needed,” says Sand.