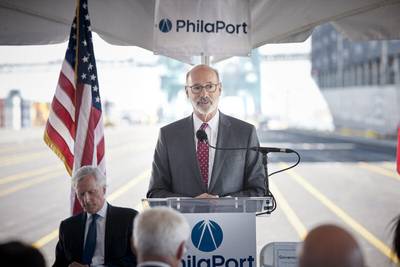 Pennsylvania Governor Tom Wolf announced that the Biden Administration has awarded The Port of Philadelphia (PhilaPort) $20.3 million to construct a new 100,000 square-foot warehouse at the Tioga Marine Terminal, as well as safety and efficiency upgrades with the modernization of the terminal’s main gate.

“A significant hub for global trade, PhilaPort is an important link in the supply chain and plays a critical role in strengthening our economy and our infrastructure, which is why I have prioritized investing in the port throughout my administration. This funding from the Biden Administration builds on investments of state, federal and private dollars, and as a result the port now has the capacity and efficiency to compete on the world stage. A public-private partnership that truly works, The Port of Philadelphia and its men and women in labor have a lot to celebrate today.”

This funding from the U.S. Department of Transportation 2022 Infrastructure for Rebuilding America (INFRA) grant program will help the port meet a growing demand and attract more business, the port said.

“The Port of Philadelphia is a critical link in our nation’s supply chains. By increasing capacity at the port, we’re allowing more commerce to flow through Philadelphia, getting goods to families more efficiently and supporting local jobs,” said US Senator Bob Casey. “This is another example of how the Biden Administration is delivering on its promise to invest in our infrastructure and strengthen our economy.”

The project was developed in a collaborative planning effort between the facility’s terminal operator, Delaware River Stevedores and PhilaPort.

“With this grant PhilaPort is able to meet the demands of the current market and add much needed capacity in the warehouse space,” said Jeff Theobald, PhilaPort Executive Director and CEO. “We receive calls daily from shippers looking for dry storage. With the construction of a new 100,000 square-foot warehouse, we will have the ability to attract new business, that will result in the creation of additional family sustaining jobs for the region.”

Construction of this project is slated to begin in 2024.

Upon completion of the new warehouse, Tioga Marine Terminal, which has recently seen an increase in demand for pulp, project cargoes, steel and lumber products, will have over 800,000 square feet of on-dock warehousing.

The safety improvements for the entrance to the terminal, including completion of a modernized gate, will increase terminal efficiency while reducing emissions and increasing safety for both port and non-port related entities.

“Safety of our labor force is paramount. With a modernized gate and approach to the terminal we can ensure that both the port and public are protected as the port continues to grow,” said Jerry Sweeney, Chairman of PhilaPort Board of Directors.

According to the port, additional benefits of the project include economic benefits from new cargo capture; improved truck circulation and terminal efficiencies as well as improved connections to the regional, multimodal network; safety and security improvements; and environmental benefits resulting from reduced truck queuing/idling and conversion of cargo from truck to rail.

The new on-dock warehouse and gate modernization is just the latest chapter in the port’s growth.

Since 2016, Governor Wolf has invested more than $539 million in the port’s infrastructure, warehousing, and equipment. Critical infrastructure investments included the purchase and implementation of three new super post-Panamax cranes at the Packer Avenue Marine terminal, the building of two new state-of-the-art warehouses, and the development of the Southport Auto Terminal, the first new port terminal in more than 45 years. Since implementing the infrastructure improvement plan, the port has realized record breaking cargo volumes, nearly 60% container growth, and created thousands of new jobs.