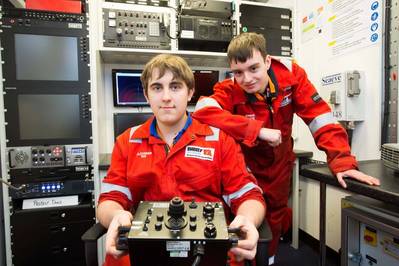 With an eye on the future, subsea services provider Bibby Offshore said it understands the importance of valuing and investing in the workforce of tomorrow, as highlighted by its successes at the 2014 Oil and Gas UK Awards, where it won in the Investment in People category and at the 2014 Northern Star Business Awards, winning in the Commitment to People Development category.

Competency and Training Manger Claire Duncan said, “One of Bibby Offshore’s Core Values is to realise the talent of its people. The company is aware that employee development contributes significantly toward achieving the company’s key business objectives, and we are consistently striving to develop ways to invest in the next generation, and nurture their skills and experience.”

In August last year, Bibby Offshore recruited its first intake of ROV apprentices, through its new ROV Training Scheme.  From the 276 interviewed, the six candidates with the most ambition, talent and drive were chosen, and are now seven months into a rigorous four year training scheme.

Bibby Offshore put employee development at the forefront of the company, and always has. In 2011 it launched the Bibby Offshore Academy and following this, the Graduate Training Scheme was developed in 2012. This scheme and others like it aim to address the training needs of future employees, and for the management and development of current employees.

Claire continued, “Now in its fourth year, the Graduate Training Scheme offers candidates the opportunity to experience various departments in the company, allowing them to fully understand how the business operates and the industry as a whole. We also give all candidates the opportunity to go offshore to gain further experience. Since its inception, the Graduate Scheme has been highly successful, with 32 candidates completing the scheme and they are now employed full time with Bibby Offshore.”

Following the success of this, Bibby Offshore has developed a number of schemes and programs to further recruit, develop and hone its staff. It has added significantly to its offerings with the Engineer Conversion Program and Lead the Way training in 2013, and most recently, the ROV Apprentice Training Scheme.

Claire continued, “Our training schemes often act as a way to build a bridge between school and further education, into business and industry, helping to improve the country’s system of vocational education, and help reduce youth unemployment.”

The ROV Apprentice Training Scheme initially involved the apprentices spending nine weeks at the Tullos Training Academy, Aberdeen developing their core skills. Following this they completed a two week rotation between college and the workplace, achieving a SCQF level 6 in Engineering whilst also gaining the experience of working in a growing, global business.

In the candidate’s first year they engage with various aspects of the business; completing core skills in communication, numeracy and information technology, before becoming involved in offshore operation projects.

The apprentices are currently progressing with the Performing Engineering Operations (PEO) SVQ level 2 certificate, and recently completed the National Certificate Unit in Designing and Constructing Pneumatic and Hydraulic circuits.

By the end of their second year, the apprentices will have completed their placement at Tullos Training Academy, and will be based within the business for the programmes remainder. Throughout the third and four year they will work towards achieving their SVQ Level 3 in Engineering and upon completion, will be classed as a skilled worker, receiving a Modern Apprenticeship Certificate. Upon completion of the scheme the apprentices will be offered a permanent role as a ROV Pilot Technician with the business.

Cameron Riddell, one of the successful candidates on the scheme, said: “Bibby Offshore really takes the time to help people learn and progress, and my first six months have been filled with a variety of opportunities providing me with the essential skills needed for the job.

“One of my personal highlights has been the visit to a selection of the vessels in the Bibby Offshore fleet including the Bibby Sapphire, Bibby Topaz and Bibby Polaris, giving us a great insight into what it will be like when we are fully qualified Pilot Technicians. I have really enjoyed my experience so far, and can’t wait to see what the future holds for me and Bibby Offshore.”