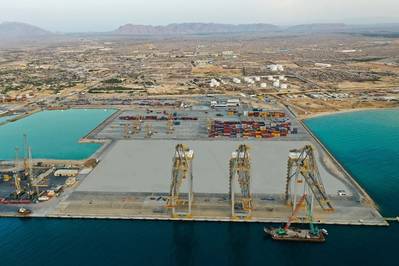 Berbera port is the main overseas trade gateway of the breakaway Republic of Somaliland. The port city is located on the Gulf of Aden – one of the globally most frequented seaways connecting the Indian Ocean and the Mediterranean.

Only a few years ago, Berbera port was a dilapidated runway, originally built by the British empire, and then modernised first by the Soviet Union and later the US. The port is the lifeline of Somaliland, which imports most of what it needs, from food to construction material, cars and furniture. Its main export is livestock to the Arabian Peninsula.

This picture changed considerably after the Emirates-based Dubai Ports World (DP World), a leading global port operator and logistics giant, took over the port management in 2017. It expanded the quay by 400m, established a new container terminal, designed a free zone, and started to manage the port’s operations.

Lined up alongside the quay are the latest crane models, which have become operational since June 2022. DP World employees practice operating the cranes every day. The hope is that the port will attract 500,000 TEU (unit of cargo capacity) per year, about one third of the capacity of neighboring Doraleh port in Djibouti. This would allow Somaliland to become a logistical hub on the Gulf of Aden competing with other ports in the region such as Djibouti, Mogadishu and Mombasa.

Analysis of the world, from experts
The cranes are crucial for the speedy handling of cargo required in a modern port. The staff training, however, takes place in a port that is yet to get busy. So far, container ships arrive only infrequently.

We have been studying the Horn of Africa’s emerging port infrastructures. The boost that the revamped Berbera port needs is for Ethiopia to come to the party. Ethiopia has been landlocked since Eritrea gained independence in 1993, and relies on the port of Djibouti – 95% of its trade goes through the port.

In 2017, a concession agreement was signed between DP World, Ethiopia, and the government of Somaliland to rebuild and modernize the port of Berbera. The 30-year concession involves: a commercial port, a free zone, a corridor from Berbera to Ethiopia’s borders, and an airport in Berbera.

The concession allowed Somaliland’s government to retain 30% of the shares in the port, 19% for Ethiopia, and 51% for DP World. But in June 2022, Somaliland announced that Ethiopia had failed to acquire its 19% share of Berbera port. Ethiopia failed to meet the conditions.

Somalilanders remain optimistic, nonetheless. The infrastructure project means a great deal to the country. It promises to foster its ambition to receive international recognition, achieve economic development, and fulfil hopes for improved living conditions of its citizens.

The context
DP World’s expansion in the Red Sea and the Gulf of Aden is taking place in the context of turbulent political transformations in the Horn of Africa.

Ethiopia’s Prime Minister Abiy Ahmed came to power in 2018 on the back of popular protests and awakened hopes of a democratic transition in the country. He ended the two-decades-long rivalry between Ethiopia and Eritrea, which brought him the Nobel Peace Prize. With a population of more than 100 million and one of the fastest growing economies in Africa, Ethiopia’s transition brought prospects of developments across the Horn of Africa.

DP World’s will to expand its operations in the region coincided with conflicts between DP World and Djibouti. In 2006, DP World had signed a 30-year concession to design, build, and operate the Doraleh container terminal in Djibouti. Growing tensions led the government of Djibouti to cancel DP World’s concession in 2018.

DP World shifted its interest from the port in Djibouti to Berbera in Somaliland and Bosaso in Somalia (Puntland). In 2017, a concession agreement was signed between DP World, Ethiopia, and the government of Somaliland to rebuild and modernize the port of Berbera. The projects covered by the 30-year concession included a commercial port, a free zone, a corridor from Berbera to Ethiopia’s borders, and an airport.

These projects are steadily progressing. Berbera port has already completed its first expansion phase. The DP World-owned free zone is under construction. Large parts of the Berbera corridor, a highway linking Berbera to Toqwajale at the Ethiopian-Somaliland border; and from there to Jigjiga and Addis in Ethiopia are finalized. According to Somaliland officials, the airport is also completed, but its original designation as a military outlet for the UAE remains ambiguous.

What next?
The infrastructure project means a great deal to Somaliland, promising to put the country on the path to international recognition and achieve economic development. However, these aspirations will not materialize without Ethiopia on board, which has not met the conditions under which it was to get a 19% share of the Berbera port. In addition it has not yet opened its markets to Somaliland traders.

Somalilanders remain optimistic, nonetheless, expecting that especially trade from eastern parts of Ethiopia will redirected to Somaliland. But this plan is not without risks. The pandemic and war in Tigray has slowed down Ethiopia’s economic growth, and the stability of the country is on the brink.

While DP World’s strategy to control ports along the Red Sea and the Gulf of Aden is already transforming the political geography of the Horn of Africa, the success of its strategy largely hinges upon Ethiopia, and so do the hopes and aspirations of Ethiopia’s coastal neighbours.

Everybody, so it seems, is currently waiting for Ethiopia.

The authors
May Darwich is an Associate Professor of International Relations of the Middle East, University of Birmingham.

Jutta Bakonyi, is a Professor in Development and Conflict, Durham University.