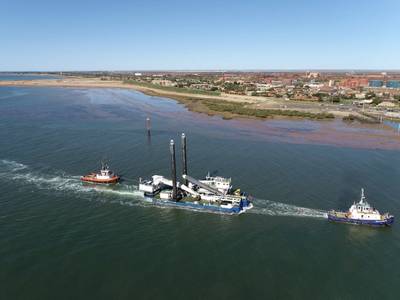 Due to its low clearance hull design, the dredge was transported from the Middle East on board a semi-submersible heavy load carrier.

After arriving at anchorage, the heavy load carrier was submersed, allowing the dredge to float off.

Now anchored at the Port of Port Hedland, prep work is underway on the dredge before dredging works commence at the Spoilbank Marina in early July.

Over the next few months, the backhoe dredge, accompanied by two split hopper barges, will start at the channel’s northern end and work toward the marina.

On completion, the 900-meter-long channel will be 2.5 meters deep at the lowest tide, enough to accommodate most recreational vessels.

Up to 190,000 cubic meters of marine sediments will be removed from the seabed and deposited at an existing offshore spoil ground, 12 kilometers away.