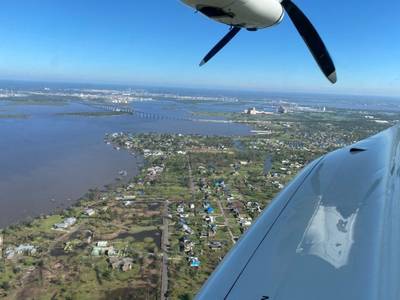 The U.S. Army Corps of Engineers said on Wednesday that it may be able to clear enough debris from Hurricane Delta to open the Calcasieu Ship Channel in Louisiana to vessels drafting up to 30 feet (9.14 m) with restrictions by the end of the week.

The Army Corps, however, said it does not have a timeline for restoration to full deep draft (40 feet) traffic.

Analysts said a fully laden liquefied natural gas (LNG) tanker has a draft of around 40 feet. Traders, however, noted LNG tankers can move through shallower water so long as they do not carry a full cargo.

There is at least one LNG tanker waiting in the Gulf of Mexico to go to Cameron, according to data from Refinitiv.

Delta slammed into the Louisiana coast on October 9.

As of this morning, the Army Corps said inland reaches of the Calcasieu River are open but restricted to vessels drafting less than 25 feet during daylight hours.

The Bar Channel section of the river, which the Army Corps said is the part that extends into the Gulf of Mexico, remains closed at this time.

The Army Corps said it anticipates that two of the three obstructions it found in the channel could be removed as early as Wednesday or Thursday.

The Army Corps said it is developing a plan to remove the third obstruction.

The Army Corps said it is still conducting surveys of the post-Delta shoaling but initial information shows promise that the shoaling is less than experienced during Hurricane Laura in late August.