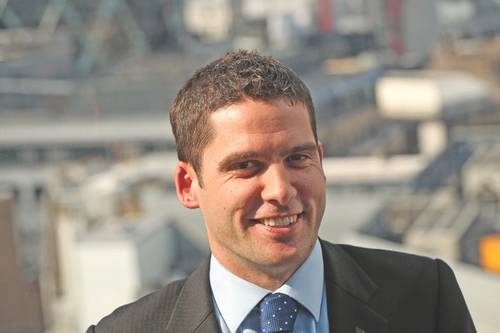 As the global maritime market remains mired in a slump, Lloyd’s Register continues to expand rapidly in the Americas market where it sees green fields of opportunity. Mark Darley, President—Americas Marine for LR, explains the strategy to conduct business over a broader range of segments and services and grow LR’s presence in the Americas.

Mark Darley, President—Americas Marine for Lloyd’s Register is an industry veteran with nearly two decades of maritime experience under his belt, working with classification society Lloyd’s Register around the world, from Europe to the Middle East to Asia. Eighteen months ago he landed in the United States to take up the challenge of expanding the scope of LR’s offering across 14 nations in the Americas, a daunting challenge on any day made exponentially more challenging with the prolonged downturn in global maritime and energy markets.

“Having had roles in Asia, the Middle East and Europe, I am fortunate to have experience and understanding of global marine dynamics, as well internal dynamics within LR as to how we can position ourselves to be serve these markets better,” said Darley.  “The Americas, first and foremost, is a huge geographic region with 14 countries that vary vastly.”

Historically Lloyd’s Register has built and maintained a strong presence in the cruise industry, giving it a natural door to North America which dominates the global cruise market. But when Darley arrived his mandate was not simply to stand pat on existing business, rather expand LR’s penetration into differing market sectors. “We have our historic core, the cruise segment. But what I see is a great opportunity to protect our lead in the cruise sector, while growing into other parts of the market.”

Make no mistake, LR is well established in the Americas with “the luxury of a good coverage with 26 offices across the Americas,” said Darley. Moreover, LR has a workforce well regarded for its ability to “span a range of segments,” said Darley. “Historically (we have been) strong with cruise in the Americas, but those same people can be productive and have conversations with customers in the LNG supply chain, for example, or offshore support vessels. We have that broad reach.”

Gas and Go
With the proliferation of gas in the global energy markets, LR sees gas in the generic as a green field of opportunity, though it is far from a new endeavor for LR, which already has a vibrant business as a certifying authority for a number of provinces across Canada. In addition, about six months ago Lloyds Register completed a restructuring of sorts, essentially the amalgamation of marine and offshore from within. “This means that we’ve grown our capability and are able to position ourselves in a much better place when we start talking about some of the gas projects, particularly in the U.S.,” said Darley.

While energy is hot, LR sees opportunity in the various navies across the Americas. Again, Lloyd’s Register has a historically strong partner in the Canadian Navy, and outside of the U.K. market where it has a very strong relationship with the Ministry of Defense, Canada is its second largest naval client. LR supports a naval team in Ottawa, and it is the sole-source regulator, helping the Canadian Navy set up a safety regime within its own fleet (currently on the combatant fleet, aiming for the non-combatant side as well).

“One thing that was transparent when I came here was to foster and grow the Canadian relationship, but to also use the model to go to new navies in Peru, Chile, Argentina and Brazil,” said Darley.

To strengthen its position in Canada LR set up a naval center of excellence in Ottawa – a literal brick and mortar facility – to support the naval client base across the Americas. “Clearly there are synergies when you see what we are doing with some of the more progressive navies in the U.K. and Canada, and you start looking at some of the future technology coming into the commercial shipping world, that’s really played into a lot of what we’ve been developing with our cyber offering,” said Darley. “Being able to leverage some of the naval experience and thought into the commercial world has helped a lot.”

Rolling on the River
Looking internally, Darley and his team see additional areas of growth in the U.S. market as well, particularly in helping inland water vessel owners navigate emerging, and often confusing regulations such as the evolving Subchapter M regulations. “We have spent the last six months understanding LR’s place in SubM and the inland waterways (and to that end) we have set up a joint collaboration with MarineCFO, who already had an existing market to supply software to the inland waterway fleet,” said Darley. “There are many smaller operators, one vessel shops, where having a classification come down to their vessel is a new thing, and arguably, a daunting thing as well.” Darley and his team aim to be the partner of choice in this regard, leveraging the relationship with MarineCFO and becoming a more familiar entity in inland waterway circles, a journey that takes equal amounts of time and effort to build long-term relationships.

But the regulatory environment in the maritime sector is fluid and growing, with increasing regulatory burden in regards to emissions into the water and the air leading the charge, namely what is happening at MEPC with the Ballast Water Convention. But Darley said that one that he and his team are monitoring particularly closely are in regards to cyber security, specifically conversations premised on what the U.S. Coast Guard is doing in regards to its cyber security regulations. “We’re trying to align ourselves with what we know is happening in the U.S. Coast Guard, what we know is happening from an IMO perspective to make sure our services are best prepared.”

The Evolution of Class
Without hesitation Darley identifies the digital revolution and all that it entails (ie. cyber security) as the defining topic driving the evolution of ‘class’ today. “This evolution is a digital evolution, as it is taking our knowledge and capability – to do physical inspections – and moving that to a digital future and regime.”

In March LR launched the next stream in its cyber and digitalization suite of services, an end-to-end set of solutions addresses the need to keep people, assets and systems secure within the constantly changing cyber security landscape.

“The world is moving rapidly, and for the last six months we’ve been developing our Cyber Security Value proposition,” said Darley. “When people think about cyber security, they tend look at it from an external point of view. But there are internal components too, and it doesn’t seem that companies are paying as close of attention to the internal component.”

“A ship is effectively a collection of components and systems that require interdependency,” he said in illustrating the point. “Multiple OEMs and competing products; that interdependency chain has not really been addressed (from a cyber security perspective).”

He cites a recent example where an OEM for HVAC went onboard a megayacht and installed an update to the HVAC system, an update which subsequently and without intention closed the fire dampers to the engine room. The engines were running, and with the fire dampers closed all of the air was sucked out of the engine room, causing a blackout on the ship. “Fortunately no one was in the engine room and no one was hurt, but it shows where something simple can cause a big problem,” said Darley. “He didn’t maliciously go to attack the vessel, and it’s not some terrorist organization … it’s just an OEM doing his job which had unintended consequences. These things we are seeing are increasingly happening.”

The new set of services from LR is built on a model that provides clarity and allows evolution in line with emerging threat patterns and the changing regulatory environment, designed to help clients understand how cyber secure they are now and what level of security they want to achieve in the future. The new offer will deliver cyber security gap analysis and other readiness services to owners, operators and other clients against the US Coast Guard Strategy on cyber security and forthcoming IMO regulations as well as the cyber security best practice already established in other industry sectors, such as Naval. To this end, LR has chosen to work with QinetiQ, bringing the benefits of QinetiQ’s cyber security skills, knowledge and experience, to complement LR’s own expertise in marine and offshore risk management.