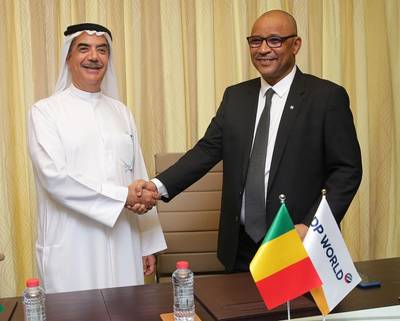 Suhail Al Banna, Chief Executive Officer and Managing Director, DP World Middle East and Africa, and Moulaye Ahmed Boubacar, Minister of Equipment and Transport, the Republic of Mali, during the signing of the concession agreement in Dubai (Photo: DP World)

DP World is set to build and operate a logistics hub in Mali under a 20-year concession agreement signed with the West African country's government, the Dubai state-owned company said on Wednesday.

Construction of the first phase of the 1,000 hectare (10 square kilometers) hub, to be known as the Mali Logistics Hub, will start next year and take 18 months to complete with an estimated initial investment of $50 million, DP World said in a statement.

"The Mali Logistics Hub will dramatically improve the cost and time of trade for Mali," said Mali's minister of equipment and transport, Moulaye Ahmed Boubacar.

"The project will provide us with a first-class logistics facility comparable to global standards and will be the largest in terms of capacity."

The hub will have a capacity of 300,000 twenty-food equivalent units (TEUS) and be located outside Mali's Bamako on the main road corridor between Bamako and Senegal's Dakar near the Dakar-Bamako rail line.

The agreement represents an economic victory for landlocked Mali, where fast escalating violence by Islamist militants in the centre and north of the country has raised questions about the government's ability to successfully hold a presidential election this weekend.

DP World, one of the world's largest port operators, has become increasingly active in Africa in recent years signing contracts for port and logistics facilities with Ethiopia, Congo, Somaliland, and others.

DP World will also provide Mali with three locomotive trains to increase cargo and passenger traffic between Bamako and Dakar as part of the concession, which it said has an automatic 20-year extension.