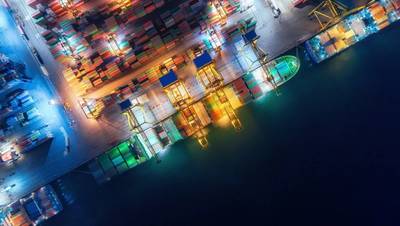 For illustration only - Credit: Pawinee/AdobeStock

Global port operator DP World has signed agreements with the government of Senegal to develop a deep-water port at Ndayane worth a total of $1.127 billion, its biggest investment in Africa to date, the company said on Wednesday.

DP World Dakar, a joint venture between the Dubai-based logistics provider and the Port Authority of Dakar (PAD), will finance, design and develop land and maritime infrastructure for the new 600-hectare (1483 acres) port about 50 km from the existing port.

The agreement to build the port was reached after talks between President Mack Sall and DP World Chairman Sultan bin Sulayem and is in addition to existing plans for DP World to develop and operate a 300-hectare container terminal in the Port of Dakar.

DP World will invest $837 million in the first phase of the Port of Ndayane and is expected to spend $290 million on a planned second phase.

"The development of the new port at Ndayane will provide a strong engine of growth for the next phase of the Plan Senegal Emergent," said Aboubacar Sedikh Beye, director-general of PAD, referring to Sall's Emerging Senegal Plan by its name in French.

DP World said the first phase would include 840 meters of quay and a 5 km marine channel designed to handle 366-meter vessels, with a second phase adding 410 meters of container quay and further dredging to handle 400-meter vessels.

It said that would allow the conversion of the Port of Dakar into a mixed-use residential and commercial waterfront and cruise terminal.

The company also said it was planning to develop a special economic zone next to the Port of Ndayane, which is about 20 km from the Blaise Diagne international airport.