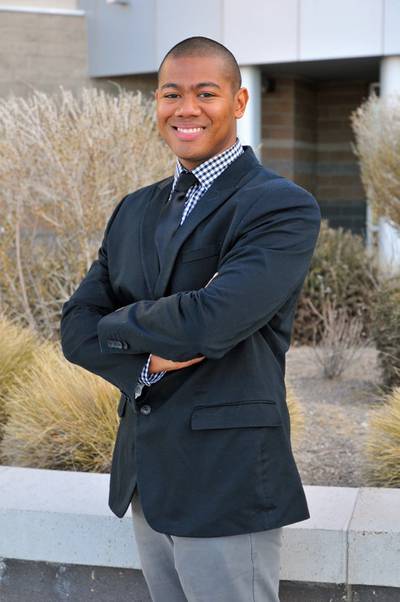 Sandia engineer Greg White has been chosen as one of the 2014 New Faces of Engineering, a recognition program that highlights the work of engineers ages 30 and younger.

The award is sponsored by the National Engineers Week Foundation, now the DiscoverE Foundation, a coalition of engineering societies, major corporations and government agencies.

“I very much appreciate the national recognition and hope that the stories of the New Faces of Engineering — which really puts a face to who engineers are — is motivation to young people that you don’t have to be a musician or athlete to be successful,” White said. “Working hard and not giving up, working with positive people who go above and beyond to give you a ‘reality check’ every now and then, can help you achieve.”

The National Action Council for Minorities in Engineering (NACME) nominated White for the award. Member organizations of DiscoverE’s Diversity Council each year nominate individuals who exemplify the ideals of the New Faces effort.

NACME Vice President Aileen Walter said her organization asks universities with which it has partnerships aimed at increased graduation rates for underrepresented minorities to identify former minority students who are advancing the engineering profession. White, a NACME Scholar as an undergraduate at Virginia Tech, exemplified what Engineering Week is about, she said.

White credited his mentor, Virginia Tech engineering professor Bevlee Watford, with putting him on the road to academic and professional success. Watford once called him to her office to discuss the balance between his classroom performance and his heavy extracurricular involvement in National Society of Black Engineers and similar professional organizations. “Our reality check discussion helped put things in perspective,” he said.

White, who earned a doctorate in chemical engineering from Clemson University, joined Sandia as a postdoc in May 2011 and became a member of the staff in August 2012. He currently works on the B61-12 Life Extension Program. “Supporting and contributing to a program that plays a critical role in our national security alongside countless bright, talented, kind folks is very important to me,” he said.

The New Faces program, started in 2003, personalizes what sometimes has been called “the stealth profession” by highlighting young, diverse and talented engineers who demonstrate that engineering is exciting, open to everyone and has an impact on society.