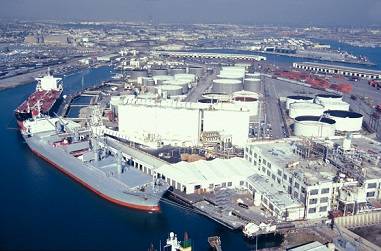 U.S. West Coast port operations resumed in full on Monday after shipping companies suspended loading and unloading of freighters for the weekend, citing chronic cargo backups the shippers and dockworkers have blamed on each other during months of labor tensions.
Reopening of the ports to cargo vessels idled by the slowdowns and weekend suspension came as the shippers and dockworkers' union were scheduled to return to the bargaining table for further labor negotiations later in the day, the two sides said.
Shippers and terminal operators announced late last week they would halt cargo crane operations for container vessels at the ports on Saturday and Sunday because of mounting congestion that they said has brought the docks to virtual gridlock.
The 29 affected ports handle nearly half of all U.S. maritime trade and more than 70 percent of Asian imports.
The companies, represented by the Pacific Maritime Association, have accused the International Longshore and Warehouse Union of deliberately instigating work slowdowns to gain leverage at the bargaining table.
The union denies this and has faulted the carriers for the worsening congestion, citing numerous changes in shipping practices as the main contributing factors.
The weekend suspension of vessel loading and unloading added to the discord surrounding negotiations of a new labor contract for 20,000 dockworkers that have dragged on for nine months.
Union officials, insisting the parties were near a settlement in the federally mediated talks, called the shippers move another act of public posturing that distracted from negotiations.
Still, work continued in the terminal yards through the weekend to clear cargo containers that have been stacking up on the waterfronts, at least at the five busiest ports - Los Angeles, Long Beach, Oakland, Seattle and Tacoma - according to Pacific Maritime Association spokesman Steve Getzug.
Union spokesman Craig Merrilees said he doubted much work to relieve the congestion actually got accomplished, calling the companies' assertions of continued weekend operations in the terminal yards "a ruse."
Crippling backups at the ports that began in October have rippled through the U.S. commercial supply chain, disrupting shipments of a wide range of goods affecting agriculture, manufacturing, transportation and retail.
The last time that dockworkers' contract talks led to a full shutdown of the West Coast ports was in 2002, when the companies imposed a lockout that was lifted 10 days later under a court order sought by President George W. Bush.
(By Steve Gorman; Editing by Will Dunham)
• United States • West Coast • Pacific Maritime Association

Have You Taken the MarTID 2020 Survey?