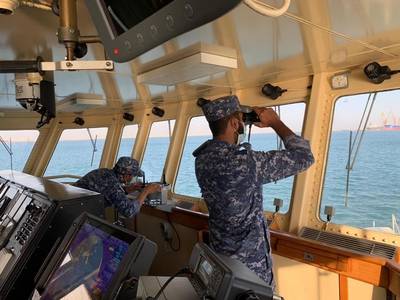 The International Maritime Security Construct (IMSC) was created July 2019 as a way to deter unprofessional behavior in the waters of the Middle East region through its operational arm, Coalition Task Force (CTF) Sentinel.

Since establishing CTF Sentinel, the focus has been on building presence within the Arabian Gulf, Strait of Hormuz, Gulf of Oman, Gulf of Aden, Bab el-Mandeb Strait and Southern Red Sea. Reassurance to legitimate mariners within the commercial shipping community is paramount.

Commercial shipping transits regularly through the Strait of Hormuz, with approximately one sixth of global oil production and one third of the world’s liquefied natural gas channeled through this chokepoint each year. The Bab el-Mandeb Strait, another significant maritime chokepoint, sees approximately 17,000 merchant ships pass through annually.

“This mission is important for shipping companies,” said Commander Khaled Mubarak Isa Bin Hindi, captain of RBNS Al Muharraq. “We want them to feel safe when they transit the Gulf. This region is important to global trade, so if our presence provides stability and reassurance to the people who operate tankers and cargo ships, then we shall remain vigilant and dutiful to the IMSC.”

“We know these waters well,” said Bin Hindi. “Bahrain’s waters are home to the RBNF giving us an operational advantage we share with IMSC coalition members. Together, we are stronger, safer.” 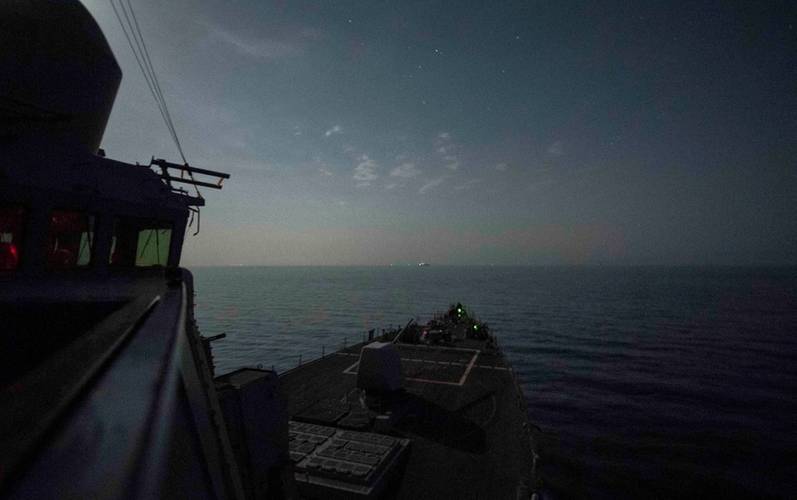 The guided-missile destroyer USS Paul Hamilton (DDG 60) transits the Strait of Hormuz transit aboard Aug. 30, 2020. Paul Hamilton is deployed to the U.S. 5th Fleet area of operations in support of naval operations to ensure maritime stability and security in the Central Region, connecting the Mediterranean and Pacific through the Western Indian Ocean and three critical chokepoints to the free flow of global commerce. (U.S. Navy photo by Mass Communication Specialist 3rd Class Matthew F. Jackson)

“One of the major advantages of IMSC is that we have this strong relationship with regional nations who belong to the coalition,” said CTF Sentinel Commander, Royal Navy Cdre. Rob Bellfield. “This provides shared awareness of activities across the region which strengthens our interoperability and coordination to deter actions that put merchant mariners at risk.”

Bellfield assumed command of Bahrain-based CTF Sentinel, April 30, providing new direction and vision for the IMSC. Having previously served as deputy commander for all Royal Navy maritime operations in the Gulf region and Middle East, he worked closely with U.S. 5th Fleet staff to integrate U.K. and U.S. Navy warfighting capability from 2013-2014.

“I have served more than 30 years – much of it at sea or in supporting operations – which has helped me develop a keen insight into the merchant maritime community particularly in this region that is vital to international trade,” said Bellfield. “Ensuring the free flow of international commerce is our top priority and we do this through the three tenets of our mission: vigilance, surveillance, and assurance.”

Coalition warships regularly patrol the waters in the Middle East region, supporting a variety of tasks.

While the coalition Sentinel and Sentry ships are on patrol, they observe the pattern of maritime traffic and monitor for malign activity.

“Sentinel ships such as the Arleigh Burke-class guided-missile destroyer USS Paul Hamilton and Royal Navy Frigate HMS Montrose provide a presence in the region that demonstrates the high level of capability we have to provide overwatch of the security situation in the Gulf,” said Bellfield.

HMS Montrose, a Royal Navy Type-23 frigate has been deployed to the Middle East since November 2019 and recently completed a third roulement of ship’s company.

“During a typical day at sea we conduct maritime security operations and patrol an area based on the needs of the region,” said HMS Montrose Commanding Officer, Cdr. Ollie Hucker.

“We provide maritime awareness calls announcing our presence via radio to all mariners in the area,” Hucker continued. “Our message is simple. IMSC promotes freedom of navigation and the free flow of commerce. If you observe any suspicious activity or require advice or emergency assistance, say something.”

Maritime awareness calls are performed by CTF Sentinel warships every hour to ensure the information reaches mariners in the area. The call encourages mariners to contact United Kingdom Maritime Trade Operations (UKMTO), a Royal Navy capability which provides a conduit between the military and the international maritime community. UKMTO provides timely maritime security information and serves as a primary point of contact for merchant vessels travelling in high risk areas.

“IMSC coordinates with UKMTO and Naval Cooperation and Guidance for Shipping (NCAGS), a U.S. capability which serves a similar purpose as UKMTO,” said Bellfield. “We are well-connected and provide support between agencies. We cannot operate as individual entities here in the Gulf. If we are to provide reassurance to the maritime community, then our missions must be woven together to ensure there are no gaps in coverage or support.”