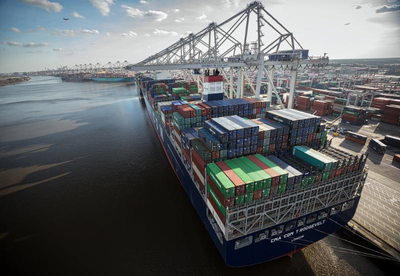 "No other single container terminal in North America has the ability to expand berth capacity at this rate," said Lynch. Currently, Savannah's Garden City Terminal is equipped to handle two of these vessels and by April of this year that number will increase to three.

During his presentation titled "2019: The Triple Crown?" Lynch told an audience of 350 logistics professionals that the Port of Savannah had just last week achieved the busiest month ever in its history, moving 433,975 TEUs, a whopping 28 percent jump over the previous year.

Over the next five years, the Authority plans to add another 21 Neo-Panamax ship-to-shore cranes, replacing 14 of its older models to bring the total fleet to 37. Dock upgrades are already under way to support the new, larger machines.

"The Savannah market outpaces its peer group for warehouse demand. One of Savannah's strong suits is that within a 30-mile radius from Gate 4 there is still a real deep inventory of industrial sites and parks that have very effective access to and from Garden City Terminal," said Blaine Kelly, senior vice president in the global supply chain practice of industrial real estate firm CBRE. "Not surprisingly, it really all starts with the ports infrastructure, the access to global markets, the capacity for long-term growth, and the proximity to the immediate and regional customer base."

In addition to the ship-to-shore cranes GPA is adding, a dozen new rubber-tired gantry cranes will bring the number Garden City Terminal's container handling cranes to 158. Ten RTGs will be commissioned in July, another two in September. Phase I of the Mason Mega Rail project will be complete in October 2019. Full completion a year later will double the Port of Savannah's rail lift capacity to 1 million containers per year. In late 2021, the Savannah Harbor Expansion Project is slated for completion, delivering the deeper water necessary to better accommodate the larger vessels now calling on the U.S. East Coast.