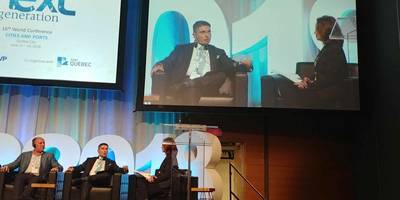 The port of Venice has been chosen as the Italian case study in the “Next Generation” international conference, which is promoted by AIVP, the International Association of Port Cities, which is meeting from June 11th to 14th in Quebec City, Canada.

To celebrate its 30 years of research and in-depth work on the issue of the relationship between the spirit of a port and that of a city in harbor cities, the worldwide network has focused its 2018 conference on “new generation ports”, so those which will be able to handle the challenges posed by technological innovation, the circular economy and decarbonization, mobility and sustainable logistics, “mixed” harbor waterfronts – where work takes place, and people also live, but where the harbor vocation is compatible with residents’ daily lives – and finally new professions.

The vision and the strategy of the port of Venice were presented by the President of the North Adriatic Port System Authority (Autorità di Sistema Portuale del Mare Adriatico Settentrionale, AdSPMAS), Pino Musolino, who was a speaker at the round table on the answers to public expectations on the future of their harbor cities.

“Attention can no longer only be focused on how to reconcile the demands of harbor activity and local people, but common views and values should also be identified, on which we can build the ‘port cities’ of the new generation”, said AdSPMAS President, Pino Musolino. “It is a prosperous future which requires innovation, human capital, cultural heritage and knowing how to manage contacts abroad: all these elements mean that long-established harbor cities can be developed. These are places where the relationship with the sea is not repudiated but seen and felt as the very essence of the nature of the city itself, and so something that is essential.”

The conference, which runs over four days, features 60 international speakers and 450 delegates from 50 countries who are involved in workshops, technical visits and debates. Every two years it gives an update on the factors that affect the harmonious development of port activity and the urban environment, and sets the tone for urban planners, environmental scientists, planners and transport organizers.