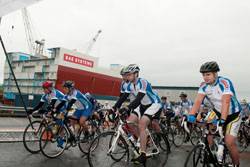 The huge mid section of the UK’s first Queen Elizabeth Class aircraft carrier will leave BAE Systems’ shipyard at Govan today, starting a 600 mile journey by sea to Rosyth, where the aircraft carrier will be assembled. Over 50 cyclists also left the yard , tracing the path of Lower Block 03 on land in an attempt to ‘beat the block’ to its final destination on the Forth and raise money for the Royal Navy and Royal Marines Charity.
Minister for International Security Strategy, Gerald Howarth, said: “This marks an important milestone - the start of the assembly phase of the HMS Queen Elizabeth aircraft carrier. Excellent progress is being made on this project and it will form the cornerstone of the Royal Navy’s Future Force 2020. It is clear evidence that the UK shipbuilding industry has the expertise and experience to deliver a project of this size and complexity, delivering our next generation of Carrier Strike capability.”
Steven Carroll, Queen Elizabeth Class Project Director at BAE Systems, said: “There’s a real sense of pride in the yard and across the Carrier Alliance today. Watching Lower Block 03 be towed down the Clyde gives us chance to reflect on the huge achievements of the past two years since we cut the first steel on this first section.
“The Beat the Block challenge gives everyone a fun way to get involved and it’s fantastic to see so many cyclists from across the Carrier Alliance taking part, helping to raise money for a charity that supports the men and women of our armed forces. This is a tough challenge and I encourage members of the public to show your support when you see the team cycle past.”
Since moving Lower Block 03 out of the shipbuilding hall at Govan two weeks ago, workers at BAE Systems have worked tirelessly to complete final preparations, including sea fastening, to ensure the block is ready for her departure from the Clyde. Over the next five days, the block will travel around the north coast of Scotland before arriving into Rosyth on Sunday 21 August.
A week later, on Monday 29 August, the team will undertake a complex operation to sink the submersible barge, allowing the hull section to enter into the water for the first time. Lower Block 03 will then be manoeuvred into position in the dry dock where approximately 350 Govan-based employees will rejoin the block as they work in partnership with employees at Babcock to complete the outfitting and assembly phase on this section of the ship.
The ‘Beat the Block’ challenge aims to raise over £10,000 for the Royal Navy and Royal Marines Charity. The challenge will test the fitness and endurance of the cyclists as they travel across the north of Scotland, stopping only for overnight respite at Fort William, Elgin, Peterhead and St Andrews. Their target is to arrive in Roysth ahead of the block on Saturday 20 August.
As a member of the Aircraft Carrier Alliance, BAE Systems is working in partnership with Babcock, Thales and the Ministry of Defence to deliver the nation’s flagships. With advanced construction underway at six shipyards across the UK, the Queen Elizabeth Class aircraft carrier programme is sustaining thousands of skilled jobs throughout industry.
Each 65,000 tonne aircraft carrier will provide the armed forces with a four acre military operating base which can be deployed worldwide. The vessels will be versatile enough to be used for operations ranging from supporting war efforts to providing humanitarian aid and disaster relief. The QE Class will be the centre piece of Britain’s military capability and will routinely operate 12 of the carrier variant Joint Strike Fighter jets, allowing for unparalleled interoperability with allied forces.