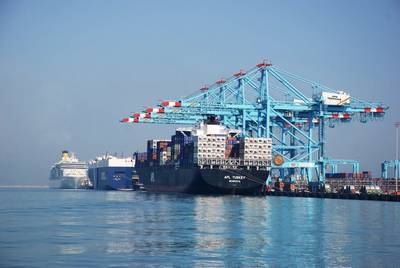 Port operator APM Terminals Bahrain plans to raise around BHD12m ($32m) through its planned initial public offering (IPO). This is the first IPO for a transport and logistics company in the Kingdom to list on the Bahrain Bourse. The listing forms part of the contractual agreement made when the port opened in 2009.

APM Terminals Bahrain will offer 18 million shares, equivalent to 20 per cent of its issued share capital, at BHD0.66 per share. The net proceeds will be paid to its current shareholders pro-rata based on their shareholding. APM Terminals currently holds 80% of the shares and the remaining 20% of shares are held by YBA Kanoo Holdings of Bahrain, a leading diversified regional business group.

Commenting on the IPO, Mark Hardiman, CEO/Managing Director, APM Terminals Bahrain said, “This is a significant moment for APM Terminals Bahrain as we move forward to launch our IPO, with an opportunity for the local and wider regional community to invest in a successful public-private partnership and Bahrain’s only commercial port.”

The offer price of BHD 0.660 per share, equates to a price-to-earnings (P/E) ratio of 5.7x 2017’s net earnings of BHD 10.4 million. Commenting on the attractive valuation of the IPO and the market opportunity that APM presents for both local and regional investors, Najla Al Shirawi, the CEO of SICO, the mandated lead manager for the IPO, said: “The much-anticipated public offering of APM Terminals is a proxy on the Kingdom’s growing non-oil economy, it offers investors extremely attractive pricing and a dividend yield of 15.5% on the offer price based on dividends paid in 2017.”

The offering will start on November 8 and will remain open until November 24. Given the strong investor appetite the company wanted to ensure that retail investors (i.e., those applying for less than 100,000 shares) have equal access to the market opportunity by allocating 30% of the shares to retail investors. Furthermore, retail investors will have a priority allocation for the first 15,000 shares applied for.