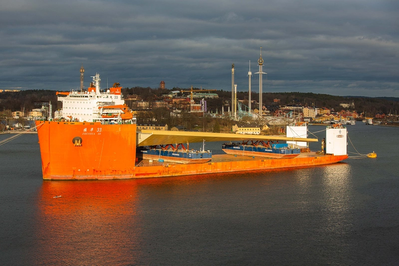 GAC Sweden has managed the safe arrival of a 143 meter long golden bridge (“Guldbron”) that will connect Stockholm’s Gamla Stan island with Södermalm on the mainland has safely completed its voyage from China. The bridge is a major feature in the City of Stockholm’s redevelopment of Slussen, the capital's second largest transportation hub.

The 45 meter wide bridge was welded to the two pontoons of the 227 meter long semi-submersible heavy-lift vessel MV Zhen Hua 33 for the journey. It was the biggest vessel ever to visit the Swedish capital – and its cargo exceeded the Stockholm Archipelago’s width restriction of 32.28 meters by more than 20 meters.

“Faced with a seemingly impossible task, we began by researching the ship’s specifications – engine power, rudder type, wind trap, bow and stern thrusters, and so on,” says Björn Fischer, Deputy Managing Director, GAC Sweden. “This we then shared with the Swedish Maritime Administration to enable them to create a model to find a way to handle the passage with the help of simulator technology. The results of that exercise were not ready when the MV Zhen Hua 33 left China on 2 January, as the first available simulation slot was less than three weeks before the ship’s estimated arrival in Stockholm on 17 February.”

With the SMA simulation outcome pending, the GAC Sweden team met with the construction company and receiver, Skanska Sverige AB, COSCO SHIPPING Lines (Sweden) AB and tugboat company Marin & Haverikonsult AB to plan the unloading operation. They also started work on arranging various permits with the Swedish Transport Agency and the Port Authority and making arrangements for the temporary International Ship and Port Facility Security (ISPS) Code zone with surveillance the ship would need when anchored in Stockholm.

Less than two weeks before the ship’s ETA, the SMA permit was received - with conditions: wind speed of no more than 10-12 m/s, minimum 1 NM visibility, daylight navigation and two pilots and to time the passage through the busy waterway.

With all the permits in hand, a new challenge hit. Bad weather with waves over 9 meters high in the Bay of Biscay forced the ship to anchor off the southern coast of Spain until conditions improved.

She finally arrived, almost a month late, at the pilot point in Stockholm, attracting the attention of TV cameras and hundreds of spectators lining the quays. 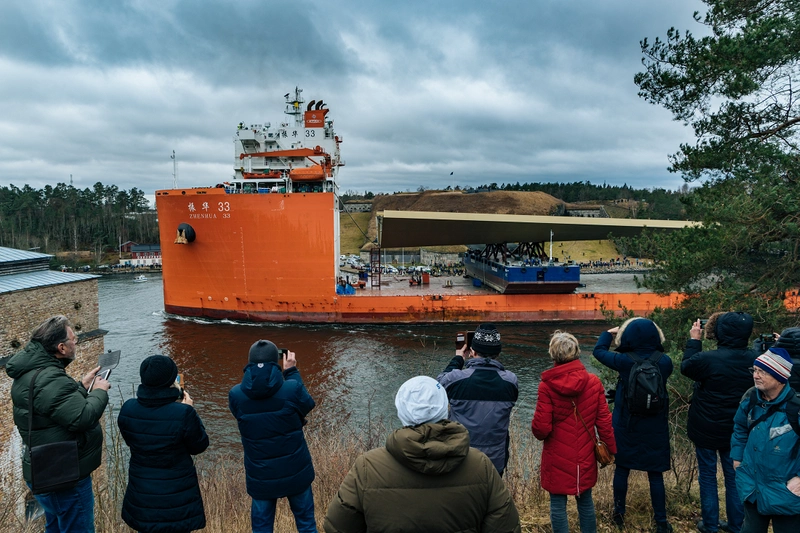