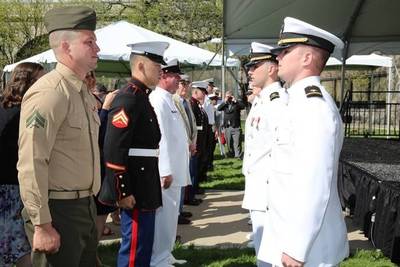 Ensign Michael Adams was the class’s valedictorian and was recognized the next day at the commencement ceremony. He was one of the three Seaman-to-Admiral 21 program selectees graduating from SUNY Maritime College this year to receive his commission.

During the ceremony, which was held under sunny skies in St. Mary’s Pentagon, Rear Adm. Dee Mewbourne, commander of Military Sealift Command, addressed the midshipmen and their families.

“You are joining an impressive naval heritage. Men and women of courage and commitment have gone before you, making our U.S. Navy the great institution it is today,” Mewbourne said. “As a nation, we treasure personal freedom. But the preservation of that freedom requires personal sacrifice. The history of our republic was forged by the selflessness and willing sacrifice of countless brave men and women who answered their nation’s call to service.

“Today, you take your place amongst them.”

During his talk, Mewbourne offered the students two pieces of advice: to become experts in their respective fields, and to encourage exemplary performance in their teams through their leadership. Leaders, he said, must constantly communicate with, train, test and challenge their teams.

“Remember what you have learned during your time here at Fort Schuyler,” he said. “Remember what it felt like to be challenged, to be successful, to be part of a winning team. You will need to draw upon those experiences as you lead the young men and women in your charge.”