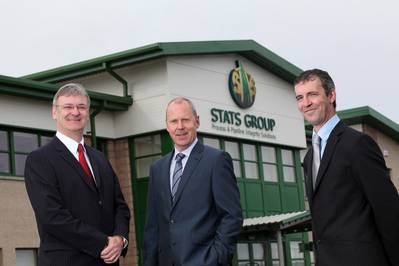 Former Expro executive chairman Graeme Coutts takes on a non-executive role in what is his first appointment since retiring from the global oilfield services company last year.

Both directors were introduced to STATS by the Business Growth Fund (BGF), which recently acquired an £7.8 million equity stake in the Aberdeenshire-based company. BGF was established to help the UK’s fast-growing smaller and medium-sized businesses, and the STATS investment marked the fund’s entry to the oil and gas industry.

“The caliber of both Graeme and Leigh is outstanding, and their appointments are a statement of clear intent that our business is embarking on an exciting new stage of development,” said STATS Group chief executive officer Pete Duguid. “Our patented tools and engineering skills are in widespread demand, and both Graeme and Leigh’s extensive international experience will be instrumental in ensuring that STATS achieves its full potential and captures a significant slice of the global pipeline isolation and integrity market.”

STATS Group designs, manufactures, installs and deploys a range of pipeline isolation tools which can make significant savings for oil and gas producers by limiting downtime in event of the need to isolate or shutdown a pipeline. Based in Kintore, near Aberdeen, the company employs 130 people in the UK, Canada, Middle East and Asia Pacific regions.

Port of Middlesbrough First to with 'Earned Reconition' Standard