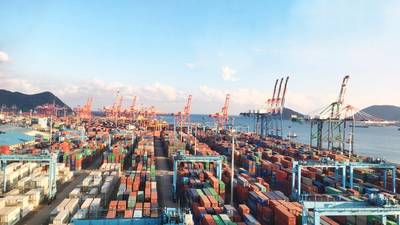 South Korean exports declined in April for the first time in 18 months, unable to keep up with 2017’s brisk pace as global demand softened, adding to worries about the country’s trade outlook amid the risk of a deepening U.S-China trade conflict.

Imports increased 14.5 percent to $43.4 billion, less than the 18.4 percent growth economists had projected but handily beating the revised 5.2 percent expansion seen in March.

That resulted in a trade surplus of $6.6 billion, slightly below $6.8 billion the previous month.

“Exports slipped but there is no need to see this as a hard landing in shipments due to a sharp downturn in global demand, because shipments still exceeded $50 billion in value, just like in March,” said Lee Sang-jae, chief economist, Eugene Investment and Securities.

Lee said exports were affected by a high base of comparison, as April 2017 saw bumper growth of 23.8 percent from the delivery of expensive vessels.

South Korea, Asia’s fourth-largest economy and home to the some of the world’s leading suppliers of smartphones, displays, cars and ships, is the first major exporting nation to publish April trade figures.

Tuesday’s trade ministry data suggested growth could slow from the brisk pace seen in 2017 as the trade-reliant economy faces weaker global demand for its computer chips, cars and ships.

The Trump administration’s stiff tariffs on some exports from major trading partners could trigger counter-measures from many countries including China, South Korea’s biggest trading partner, and escalate global trade tensions.

“There is still the risk of a trade war between the U.S. and China, which will affect global demand and hurt South Korean exports,” said Lim Hye-youn, an economist at Daishin Financial Group. Lim expects South Korea to post export annual growth of 7 percent to 9 percent this year.

Exports to the European Union dropped 21.2 percent, while shipments to Vietnam fell 17.6 percent from a year earlier.

South Korea’s economy expanded 1.1 percent in January-March from the previous quarter, supported by exports of data memory chips and a boost from government spending, after contracting 0.2 percent in the fourth quarter.